What are the odds that the winner of an political contest would be determined by their ability to win six, and just six, separate coin flips?

While it was hard to call a winner between Hillary Clinton and Bernie Sanders last night, it’s easy to say who was luckier.

The race between the Democrat presidential hopefuls was so tight in the Iowa caucus Monday that in at least six precincts, the decision on awarding a county delegate came down to a coin toss. And Clinton won all six, media reports said. 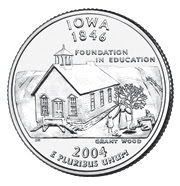 So how "lucky" was Hillary Clinton so late in the evening of 1 February 2016?

We can find out by calculating the probability of correctly calling a coin toss six times in a row, which will tell us how likely that achievement really is. Here, each flip of the coin presents the people calling either heads or tails with a 50% chance of being right. But how do the odds of success change when a coin is flipped six times, where in order to be declared the winner of a contest, the outcome of the coin toss must be called correctly by a contestant all six times?

Well, we don't call ourselves Political Calculations for nothing. We built a tool to do that math! To find out what we did, just click the "Calculate" button below. (And if you're accessing this article on a site that republishes our RSS news feed, please click here to access a working version of our tool on our site.)


We find that the percentage odds of correctly calling the outcome of 6 coin tosses exactly 6 times by chance is 1.56%, or rather, the odds are that this exact outcome will occur by chance just once in 64 opportunities.

Which is also to say that there was a 98.44% chance that this outcome would not occur by chance.

As for how likely or unlikely that event is, we did some probability math with data for the Dow Jones Industrial Average that goes back to 2 May 1885, where we found that the odds of winning six out of six coin tosses is slightly more likely that seeing the value of the Dow close below its previous day's closing value on five consecutive days. That is something that has happened in real life some 482 times over the 35,889 days for which we have this data, which works out to be a 1.34% probability of occurring by chance.

The bottom line is that it's unlikely that chance alone explains the outcome of a political candidate winning six out of six coin tosses, but it's not as completely improbable as you might think.

And for the record, we've routinely done far more improbable things than that for years!

Richard Lowry presents the detailed calculations and an online calculator for finding binomial probabilities that gets around our tool's limitation of 170 opportunities!