Political Calculations
Unexpectedly Intriguing!
04 March 2016
Inventions in Everything: Texting Your Dog a Treat

Ah, modern technology. In a day and age where human beings are so consumed by whatever it is they're checking out on their mobile phone screens, it's not surprising that their poor pets are being neglected. Wouldn't it be nice if there were a way to use an app to reconnect with a furry friend? (We mean the four-legged variety - not the kind you might find on Tinder!)

Well, not only is there an app for that, there's a whole system for that! On 5 January 2016, the U.S. Patent Office issued U.S. Patent Number 9,226,477 to Andrew Peter Davis of Bellevue, Washington for his invention "Internet canine communication device and method"! Here's the basic description of the invention from the patent abstract:

Enhanced methods and systems for human-pet communication are described. Example embodiments provide an Internet Canine Communication System ("ICCS"). The ICCS facilitates remote communication and interaction with between a dog and its owner, caretaker, trainer, family member, or the like. The ICCS may include a base station or similar device that is configured to deliver treats to a dog and to transmit audio/visual communication between the dog and a remote client device operated by a human user. The ICCS may also facilitate training the dog to utilize the ICCS to communicate with the user, such as by answering calls from or initiating calls to the remote client device of the user.

Here's one of the figures from the patent that illustrates the basic system that inventor Davis envisions: 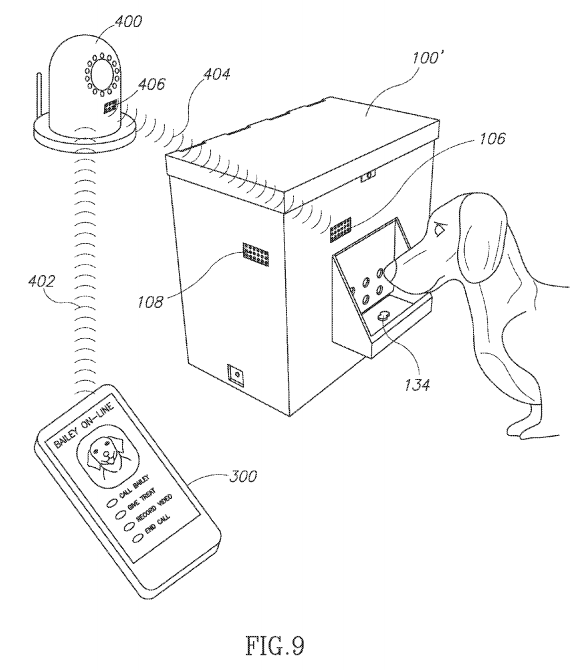 So what do you have to do to make this system work to text your dog a treat? Fortunately, one of the patent illustrations provides a helpful flow chart: 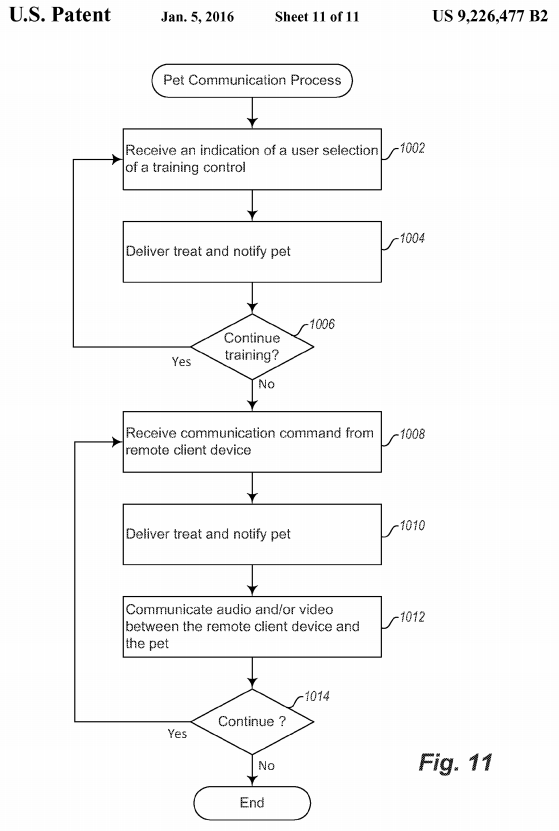 Still, many smart phone-wielding pet owners might want an app that would let them know how their pet is feeling, so they know when their pet might need a pick me up as they might dispense using the invention described above. The good news is that there is already an app for that!

Ever wonder what your pet Fido or feline is really thinking when you stroke or walk them?

A Japanese company has developed a small device that, when attached to the necks of dogs and cats, it says can analyse more than 40 kinds of movements to discern their emotions.

Owners can tell if their pets are happy, relaxed, want to play or are annoyed by using a smartphone application that links to the device, according to maker Anicall.

Reading that last sentence, we can't tell if its the owner who wants to tell if it is their pet that is annoyed, or if the app communicates to the owner that the pet is annoyed by using a smartphone application that links to their owner's mobile device. We're pretty sure it's the latter.