Not much happened to the S&P 500 during the second week of August 2016. The week began with investors apparently focused on the distant future quarter of 2017-Q2 and the week probably ended the same way. 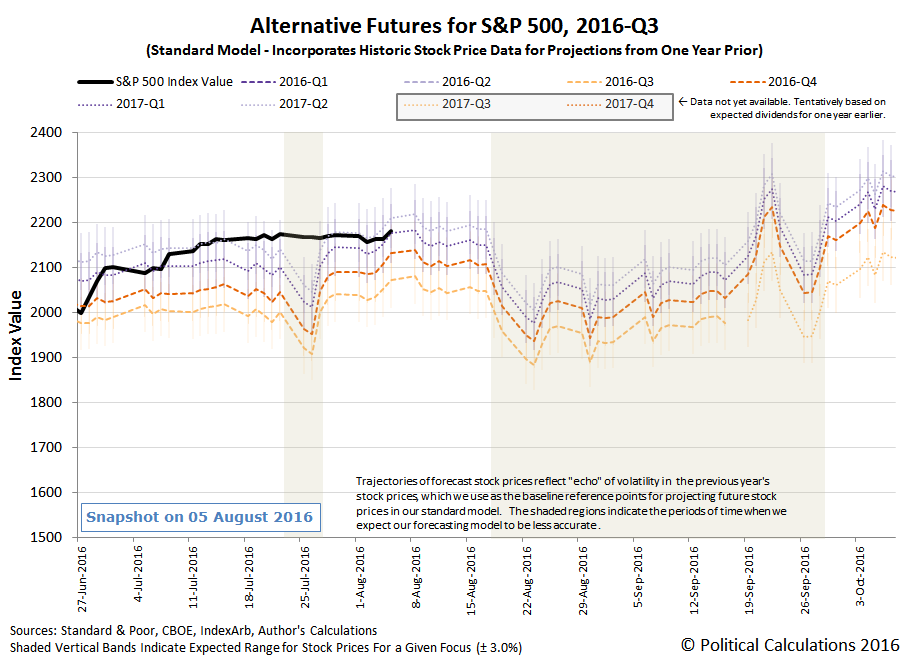 We say "probably" because the small echo of past volatility makes it look like investors may have shifted their focus slightly toward the nearer term horizon of 2017-Q1 in our standard model presentation, but not so much that the S&P 500 falls outside the range of values we would expect if investors had simply kept their forward-looking focus steady on 2017-Q2.

In other words, all signs indicate that it was a boring week and we're not going to dwell upon it. Next week will be better because we'll at least be dusting off the modified model we'll be testing out for most of the remaining quarter.

Here are the more significant headlines we flagged during Week 2 of August 2016.

It just occurred to us that what we're doing with making notes of these headlines is very similar to what Barry Ritholtz does with his "succinct summations" of each week's news events, and is probably for the same reason - so if and when we ever need to return to a particular week in question, say because it turns out to mark the beginning of a change in trend for the stock market, we can quickly reconstruct the context of events in which the change occurred to more quickly identify causal factors behind the change.

If you're a fellow cliometrician following along at home, that means that you should expand your resources to be sure to include Barry's weekly summaries of contemporary events to get a more complete picture between what he found significant during the week and what we did. Any differences between the two may be chalked up to the relative weightings we each put on certain news events as significant. We try to give greater emphasis to news reports that provide some indication of how far into the future investors are collectively focusing their forward-looking attention, which directly affects the level of stock prices, while Barry provides a more general status of the week's market and economic news, which may provide more insight into what understanding investors had about the overall climate of the market.