Two weeks ago, we noticed an unusual trend for the number of dividend increases announced by U.S. firms in August 2016, where we saw that it was falling as compared to the year over year data.

What makes that trend unusual is that it came at the same time that we saw an improvement in the trend for the number of U.S firms declaring that they would be cutting their dividends in August 2016 compared that announced dividend cuts a year earlier.

Because of that contradiction, we thought it might be worthwhile to keep closer track on how the trend for dividend increases progressed throughout the month of September 2016, where we would compare that progression with what happened a year earlier, in the month of September 2015. The following chart shows what we find when we sampled the dividend increase data from our real-time news sources for them. 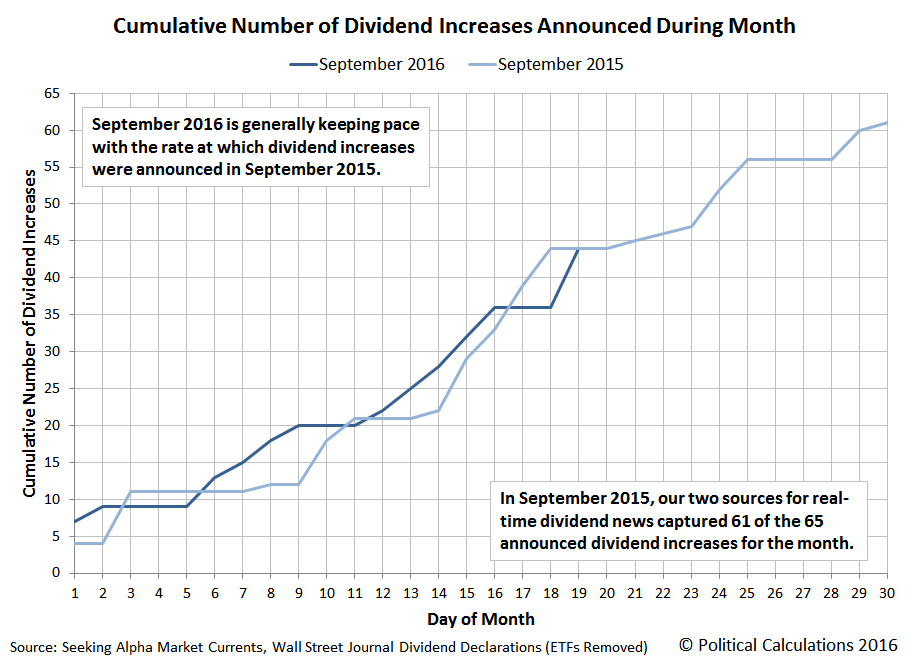 Through the 19th day of September 2016, we find that the pace of dividend hikes is generally keeping pace with the rate at which dividend increases were announced a year ago, and in fact, has tended to be slightly ahead of that pace.

However, we have to recognize that isn't as clear a signal of strength as we would like, since much of that difference might be attributed to the relative timing of weekends and holidays between September 2015 and September 2016.

Perhaps we'll get a clear break in one direction or the other in these last two weeks of the month to more clearly indicate if September 2016 will continue the unusual development we saw for dividend hikes in August 2016. If you would like to keep track on your own, our data sources are linked below.