The second full week of September 2016 was the most volatilile one we've seen for the S&P 500 since the Brexit noise event of June 2016. At the same time however, it was perhaps the least eventful. 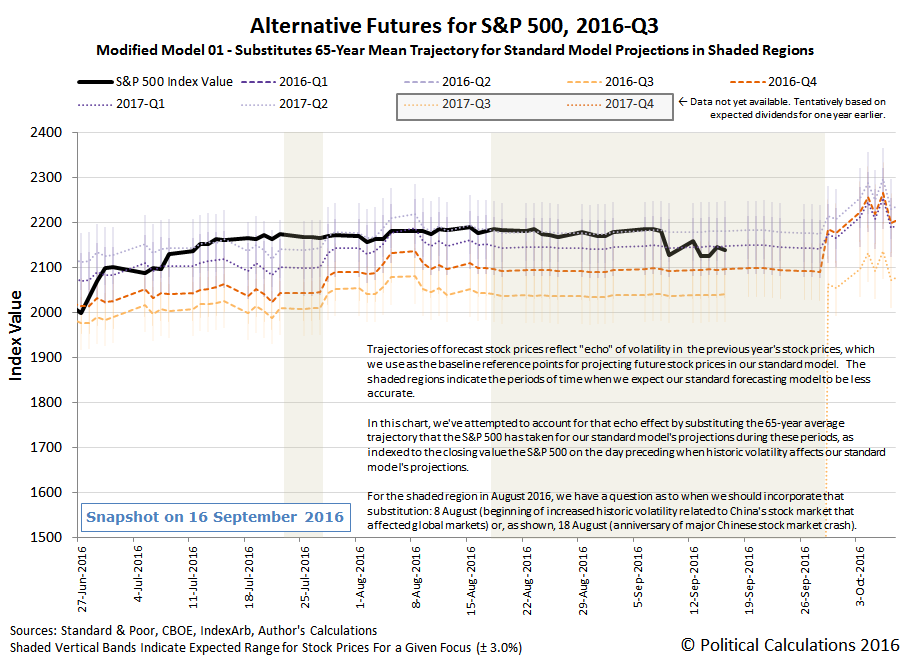 Following on the heels of a new Lévy flight event on Friday, 9 September 2016, we had gone into the week armed only with the knowledge that:

If investors should fully shift their attention to the current quarter of 2016-Q3, the S&P 500 could potentially fall by another 4-7% in the next week. More likely, with 2016-Q3 now drawing to a close, investors will split their focus between the very near term present and the far future, with stock prices fluctuating between the levels corresponding to their being focused on 2016-Q3 and 2017-Q2.

Those potentially large fluctuations will continue until investors have reason to collectively focus on just one particular quarter in the future, after which stock price volatility will diminish, as stock prices will move from whatever level they are when that happens to a level consistent with that alternative future. At least in the absence of a fundamental change in the expectations that investors have for future dividends and earnings, which would alter the projected trajectories themselves, or by another significant noise event, which are driven by the reaction of investors to the random onset of unexpected new information.

One week later, our modified futures-based model suggests that process is indeed playing out with minimal noise or fundamental shifts in future expectations, with investors increasingly focusing their forward-looking attention toward 2017-Q1 and the expectations associated with that future quarter in setting today's stock prices.

As for being the least eventful week of 2016-Q3, with the Federal Reserve having entered its "blackout" period on Tuesday, 13 September 2016 for its officials making public statements ahead of the conclusion of the FOMC's September meetings that conclude this Wednesday, investors had little other than economic and financial data releases to influence how far into the future they might choose to look. Here are the headlines that attracted our attention during the week that was.

Barry Ritholtz has the big picture of the positives and negatives in the week's markets and economics news.