We're well into what might be described as the third phase of the second U.S. housing bubble.

That might seem like a bold statement, but it's something that really becomes evident when you track the trailing twelve month averages of median new home sale prices against median household income in the U.S. on a monthly basis. 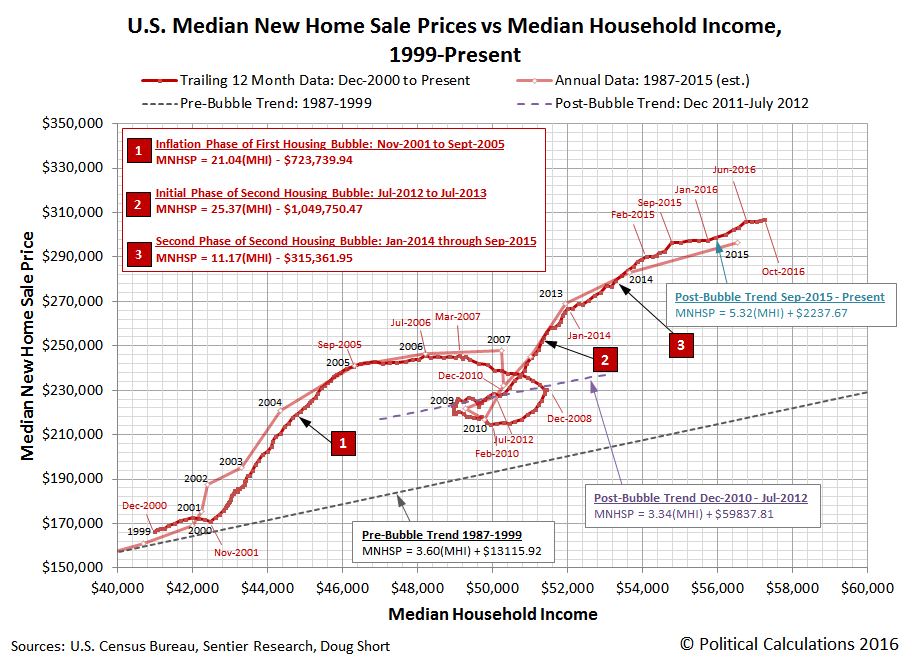 The primary factor fueling the decoupling of median new home sale prices and median household income in the United States away from its long term relationship is a shortage condition for homes in the U.S., particularly in regions that have adopted policies that have largely closed access to meaningful real estate development within them.

[Note: If you follow the links in the above paragraph, you'll find they point to posts at Kevin Erdmann's Idiosyncratic Whisk blog - he will have a book capturing much of his analysis on the topic coming out sometime in 2017!]

As for being in the third phase of that second housing bubble, you can see where we're at in the following chart that illustrates the three main trends for the trailing year average of reported median new home sale prices in the U.S. since July 2012. 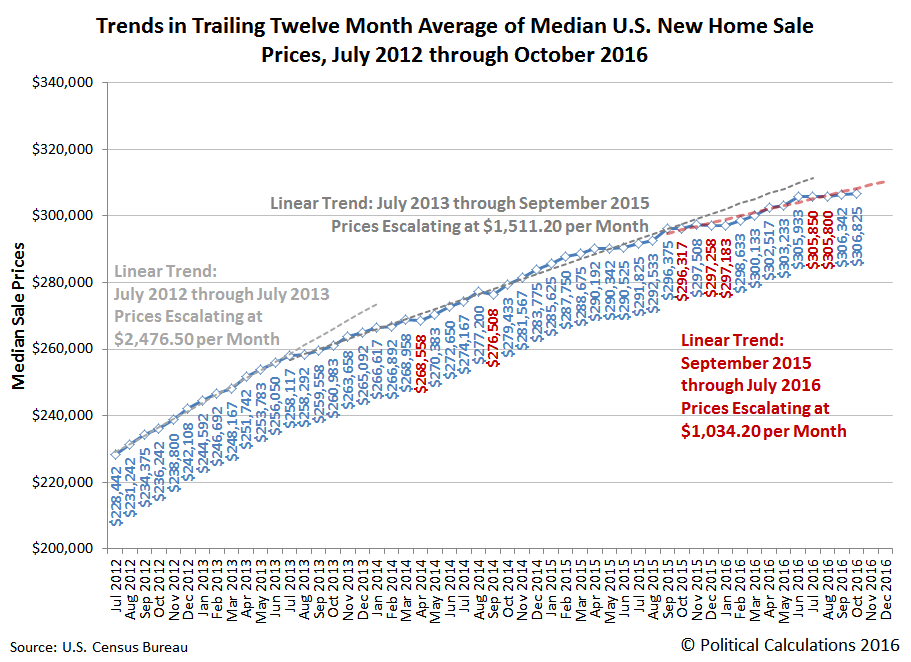 The initial inflation phase was kicked off by major investors who snapped up properties as fast as they could in the period from July 2012 through July 2013, which saw median new home prices rise at an average rate of $2,476 per month. The second phase came as a number of the investors behind the first phase began seeing less opportunity to realize easy gains, which resulted in their slowing their activities - that phase ran from August 2013 through September 2015, where median new home sale prices in the U.S. rose at an average rate of $1,511 per month.

The third phase began in October 2015 and has continued to the present, which has more closely resembled the kind of transactions that defined the established trends for new home sales in the U.S. before the onset of the first U.S. housing bubble in November 2001. During the third phase, median new home sale prices have been rising at an average rate of $1,034 per month.

Finally, we should note that to really be a "bubble", median new home sale prices would have to fall significantly at some point in the future, since a bubble itself has two main phases by definition - an inflation phase where prices escalate and a deflation phase where they collapse. Since July 2012, we've only seen median new home sale prices escalate in what we're calling the second U.S. housing bubble, so whether it is a true bubble has yet to be determined.

Sentier Research. Household Income Trends: October 2016. [PDF Document]. 29 November 2016. [Note: We have converted all the older inflation-adjusted values presented in this source to be in terms of their original, nominal values (a.k.a. "current U.S. dollars") for use in our charts, which means that we have a true apples-to-apples basis for pairing this data with the median new home sale price data reported by the U.S. Census Bureau.]