Political Calculations
Unexpectedly Intriguing!
31 January 2017
An Explosion in the Regulation of the American People

With President Trump's response to the role of red bureaucratic tape in hampering small business just in the news, we thought we'd take a historic look at how many pages of new rules and regulations the federal government spits out every year.

Or rather, in each year beginning with 1936, because that's all as far back as we could find the data! The chart below visualizes what we found for more than 80 years worth of federal regulations, and as you can see, it ends with a bang! 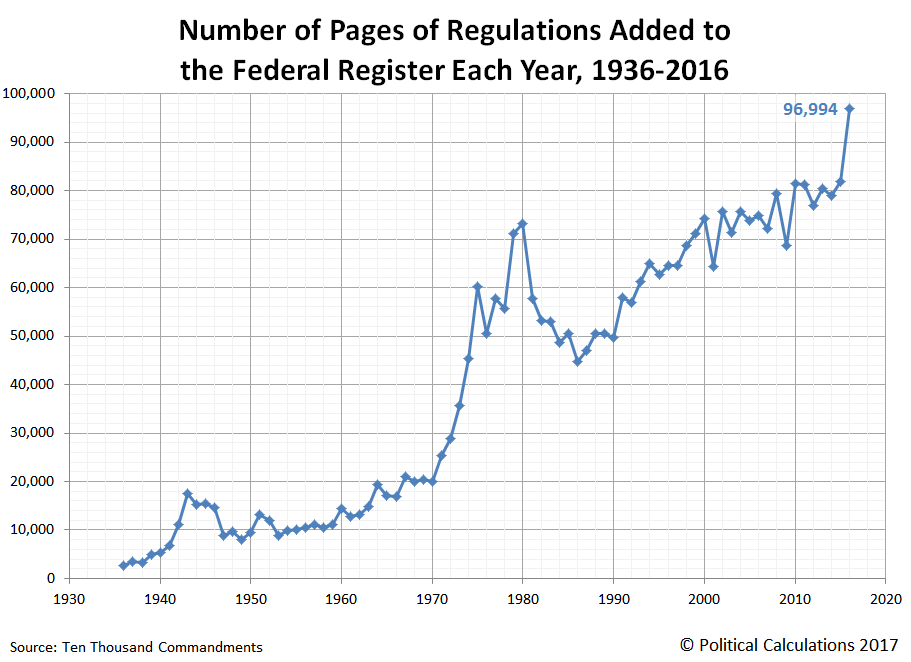 With the exception of the period of World War 2, we find that the federal government used to be pretty well contained when it came to imposing new rules and regulations on the American people - at least, all the way up to 1970, when it appears to have undergone a bureaucratic explosion!

Here, the creation of the Environmental Protection Agency appears to have been the impetus for unleashing unprecedented waves of new rules and regulations affecting nearly every aspect of American life all throughout the next decade.

And then, they went *BOOM* in the last year of Barack Obama's term in office, as the lame duck President sought to crank out as much of an enduring legacy as he could in his administration's waning days by publishing 96,994 pages worth of regulations in the Federal Register in 2016. Many of which were rushed into print to beat the clock after his preferred successor, Hillary Clinton, failed to win the 2016 Presidential election.

Since President Trump's Executive Order on Reducing Regulation and Controlling Regulatory Costs requires government agencies to remove two regulations for every one new regulation that they issue, and because those changes would also have to be documented, we wonder how many future pages of the Federal Register might be taken up by the corresponding reductions in the federal government's regulation of the American people.

Update: President Obama's 2016 regulation rush continued well into 2017, where the Federal Register expanded by an additional 7,600+ pages before he finally exited the Oval Office on 20 January 2017 and President Trump acted to shut off the regulatory spigot.