In January 2017, the number of publicly-traded U.S. firms that declared that they would be cutting their cash dividend payments to their shareholders fell from the 59 that were reported in December 2016 to a level of 47.

While that figure is still elevated well above the level that is consistent with some degree of contraction occurring within the U.S. economy, it also represents a decline from the year ago figure of 55, which had come as part of a rising trend for dividend cuts that resulted from the economic distress unleashed by the sustained collapse of oil prices on the U.S. oil and gas industry, which lasted from July 2014 through February 2016. 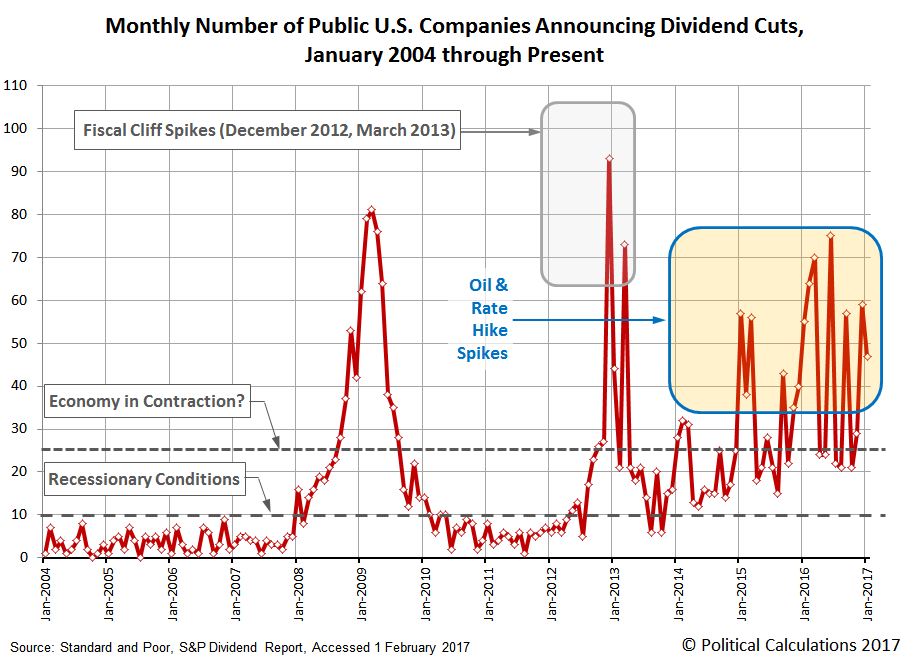 Today, some elements of that distress is still lingering in the U.S. oil sector, where oil prices have somewhat recovered and have stabilized, but the effect of rising interest rates is also taking a toll. Finance-oriented firms and other interest-rate sensitive entities such as mortgage-related Real Estate Investment Trusts (mREIT) have become more common in the count of companies that have announced dividend cuts over the last 16 months, as the Federal Reserve has frequently threatened and occasionally acted to drive up short term interest rates in the U.S. during that time.

Perhaps the best way to describe the state of the U.S. economy is that it may finally beginning to emerge from a sustained period of microrecession, where although substantial portions of the economy were clearly in contraction for a prolonged period of time, that distress was limited enough in both scale and scope for the overall U.S. economy to avoid experiencing similar contractionary conditions.