For a stock market that is verging on setting record highs, the action of stock prices during the first week of February 2017 was almost anything but exciting!

For proof of that proposition, check out the trajectory of stock prices against the backdrop of the path we first predicted they would follow five weeks ago. 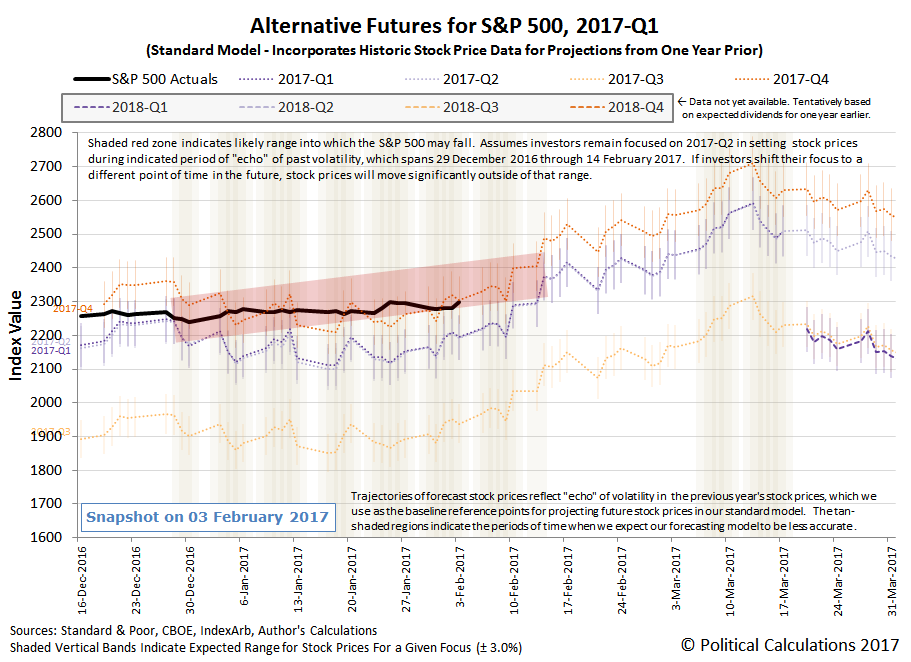 Over the last several weeks, we can see that the closing value of the S&P 500 has been slowly stair-stepping upward, where the index hasn't shown much volatility. For us however, the trajectory that it has taken continues to fall within the range we forecast back in the first week of January 2017.

That forecast path assumes that investors would remain focused on 2017-Q2 in setting stock prices, which seems to have held through the Fed's January 2017 meeting. This quarter coincides with the expected timing of the Fed's next hike in short term interest rates, which is why we believe investors are collectively focused upon it in making their current day trading decisions.

Looking ahead, for our forecast to continue to hold, the S&P 500 will need to show some upward movement. The next two weeks will hopefully be more interesting than the last five!

Looking backwards again, here are the headlines that stood out to us for what they indicate about the future expectations of investors, along some notes we made during Week 1 of February 2017.

For the bigger picture, Barry Ritholtz summarized the positives and negatives for the U.S. economy and markets for the trading week ending on 3 February 2017.