We've had a remarkably good run in forecasting where the S&P 500 was likely to go over the past several months, but that almost perfect track record came to an end on Tuesday, 21 March 2017 when investors suddenly shifted their forward-looking attention away from 2017-Q2 to focus more strongly upon the more distant future of 2017-Q3. 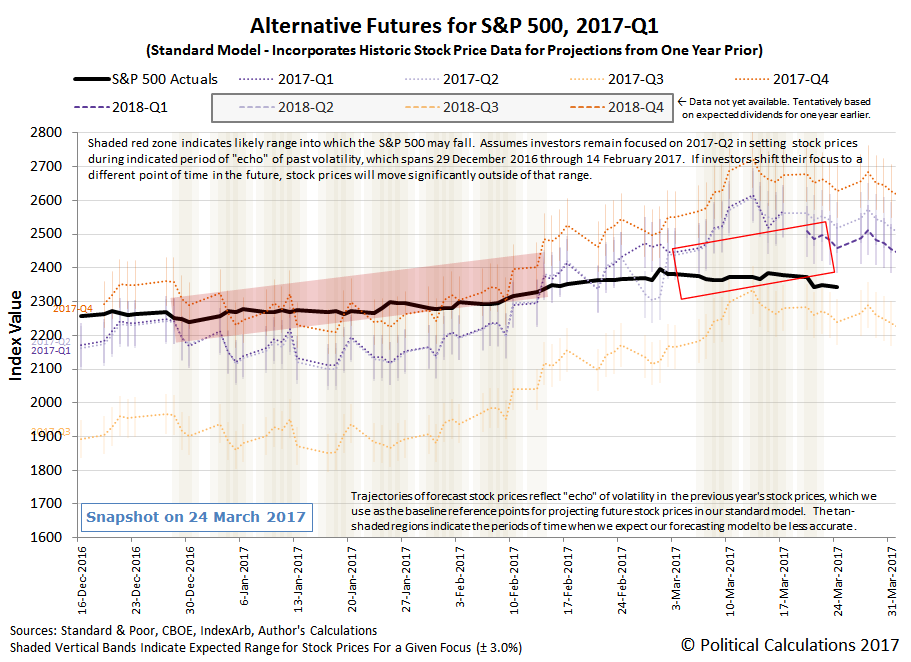 While we had anticipated that the volatility of the S&P 500 would be very likely to increase, the timing of the "screeching halt" to which the S&P 500's extraordinarily low level of volatility over the last several months came as its "history-setting trading streak" ended on 21 March 2017 caught us by surprise. You can see that surprise in the chart above where we had shown our short-term forecast range (the red-lined box) extending through 22 March 2017.

However, the dynamics that coincided with that sudden shift were those that we described in our notes last week. At present, we think that investors are still splitting their attention between 2017-Q2 and 2017-Q3 in setting current-day stock prices, but are currently placing a higher weighting on 2017-Q3 in doing so, which given where stock prices were, meant that stock prices would fall.

Right now, given the level of stock prices between the two alternative trajectories that the S&P 500 would be following if investors were exclusively focused on either 2017-Q2 or 2017-Q3 in setting their future expectations, we think that investors are now placing a 62% probability that the Fed will be compelled by poor economic data to delay its next intended increase short term U.S. interest rates into that more distant quarter.

The significant difference in the future expectations for 2017-Q2 and for 2017-Q3 is what will lead the S&P 500 to experience higher-than-recent levels of volatility during the next several months, where good news will lead investors to focus in the nearer term (as the Fed will be more likely to next hike interest rates sooner), and where bad news will lead investors to focus on the more distant future, where the Fed will delay its next rate hike.

Next week, we'll show you what that potential trading range will look like over 2017-Q2. Until then, here are the headlines that we identified as noteworthy over Week 4 of March 2017.

For a bigger picture of the week's more notable news, Barry Ritholtz lists the week's positives and negatives for the U.S. economy and markets. (Spoiler alert: the week had more negatives than positives!)