In the fourth and final week of April 2017, the biggest market moving news of the week wasn't the election outcome in France, nor was it the release of President Trump's highly anticipated tax plan (if you can call a one-page document a plan), nor was it anything to do with the kind of geopolitical events that have contributed noise to the markets over the last several weeks.

Instead, it was a combination of good old fashioned solid earnings reports and mostly positive economics news that defined the week that was for the S&P 500. As it should be, although as we'll soon discuss, that good news comes with consequences. Here's our alternative futures chart showing the actual trajectory of the S&P 500 with respect to what our dividend futures-based model projects for four different scenarios, each distinguished only by the expectations associated with the particular future point of time to which investors would need to fully focus their forward-looking attention to set today's stock prices. 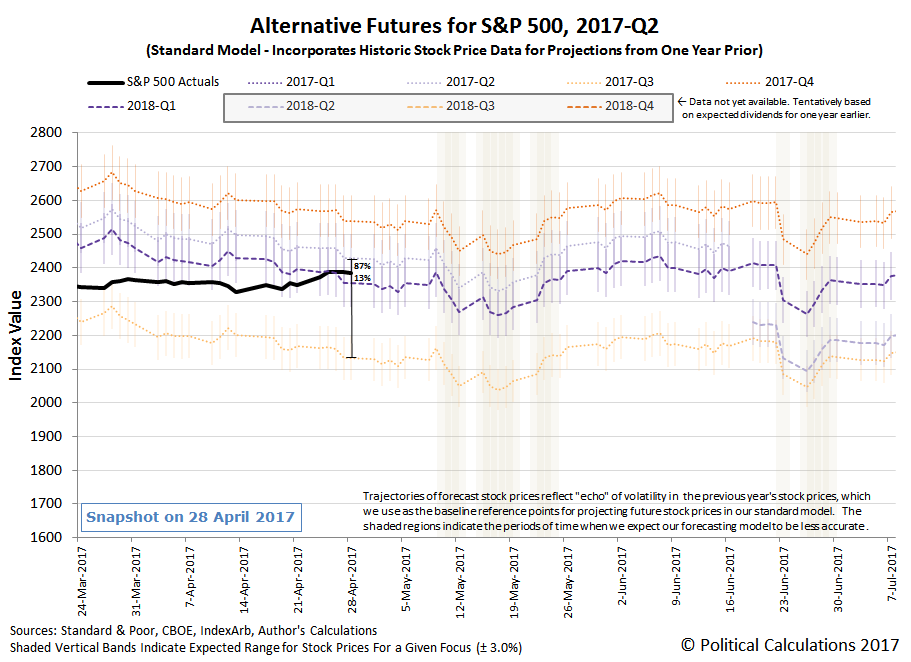 The consequences that comes with the week's mostly positive market and economics news is that the Fed will be more likely to next hike its Federal Funds Rate, the basic interest rate that often sets the floor for all others in the U.S., sometime during 2017-Q2. Going by our estimate of the regular dividends per share that will be paid out during the quarter, we would estimate that investors are now assigning an 87% probability that will happen before the end of 2017-Q2, and only a 13% probability that the Fed will hold off until 2017-Q3.

Given where the S&P 500 started the week, we think that stock prices rose during the week in response to that stronger focus on 2017-Q2.

Before we get into the major news headlines that we flagged during Week 4 of April 2017, we do want to emphasize that our analysis in assessing how far forward investors are focusing their attention is based on our estimate of the regular dividends per share for 2017-Q2. The raw data for that quarter is showing what we believe is an reporting anomaly, where the unadjusted version of our alternative futures chart looks like the one below.... 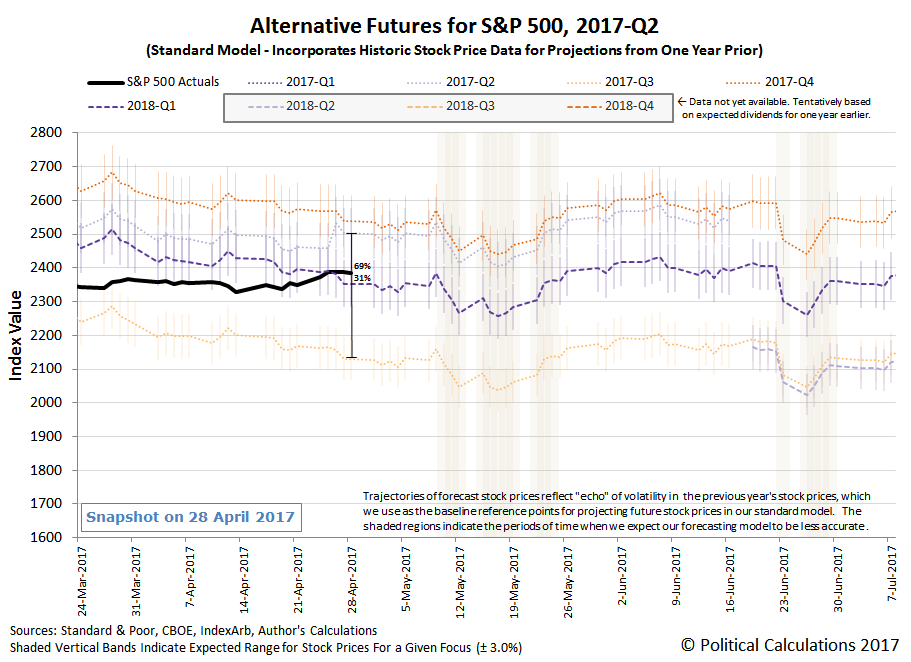 Why is the unadjusted chart so different for the trajectory associated with 2017-Q2? We believe we've traced the specific anomaly to a special dividend announcement made by Costco (Nasdaq: COST) on 25 April 2017, in which they declared that they would be paying out a special, or extra, dividend payment of $7.00 per share to their stockholders. The company also declared that they would be boosting their regular quarterly dividend by 5 cents a share, from $0.45 to $0.50 per share (or from $1.80 to $2.00 per share in terms of its annual dividend).

We think that the implied future dividends to be paid out by S&P 500 companies during the quarter ending in June 2017 (CBOE: DVJN) is rolling in Costco's $7.00 per share special dividend as if it were a regular dividend.

Because Costco's special dividend payment represents a more than $3 billion increase above and beyond what the $104 billion in dividends that all S&P 500 companies will pay out during 2017-Q2, the effect on the projected dividend per share for the entire S&P 500 index would be to boost it by about 40-45 cents per equivalent S&P 500 share, or in this case from the value of $12.15 per share before Costco's special dividend announcement to a value of $12.47 per equivalent S&P 500 share.

Alas, because that boost is the result of a special dividend, we believe that its only a matter of time before the reporting anomaly for DVJN will be corrected. We should note that the anomaly doesn't provide a trading opportunity because these implied future dividends represent the CBOE's estimates of forward expected dividends that are tied to particular DVS option expirations, but aren't themselves traded. Meanwhile, the CBOE's DVS options are tradeable, but because they don't share the same reporting anomaly, there's no opportunity there.

Here are the headlines that caught our attention during Week 4 of April 2017.