How boring was the week? Well, when you consider that the week's biggest event for market volatility occurred on Thursday, 27 July 2017 when, in the space of 30 minutes after lunch on the east coast, the S&P 500 lost 0.5% of its value (about 12 points), before going back to recover most of it by the market's close, ending the day at 2475.42, less than two and a half points below where it opened.

That's apparently what constitutes a market freakout in what has been this summer's low volatility environment. But that got us thinking - how much would stock prices have to change from where they are at today to constitute a legitimate freakout session?

The answer is revealed in the following chart, where we're plotted the daily closing value of the S&P 500 against its trailing year dividends per share. 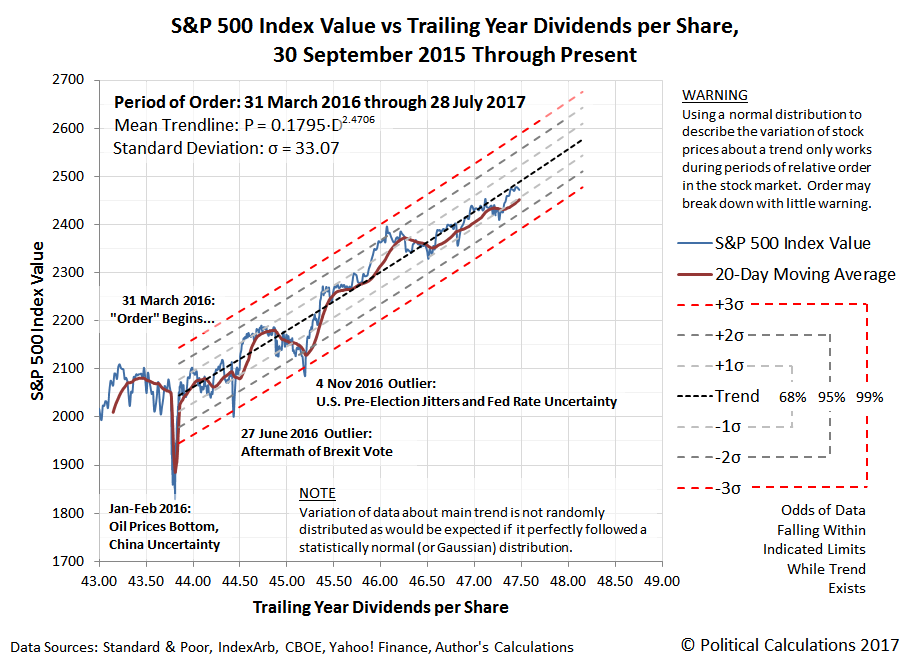 In this chart, what matters most is the relative period of order that has existed since 30 March 2016, where we find that with respect to the mean trend curve for the relationship between stock prices and trailing year dividends per share, we find that the S&P 500 is just under the middle of the range that we would expect it to be. If reversion to the mean means anything for the stock market, that's the mean the market would be reverting to in its current state of order.

It would only be if stock prices were to move outside the red-dashed curves that we would become concerned about the potential a breakdown in the current period of order, which given where the S&P 500 closed on Friday, 28 July 2017 at 2421.10, would either mean a decline of nearly 100 points or an increase of more than 100 points.

As a general rule of thumb, we would only really get interested in the daily action of the S&P 500 when it changes by more than 2% of its previous day's closing value (about 50 points in today's market). A more significant threshold would be if the stock prices were to alter their trajectory by two standard deviations, or 66 points for today's market.

So that's where we're at. We'll close out this bit of analysis by looking into the future for the S&P 500, which is pretty much behaving almost exactly like we anticipated last week. 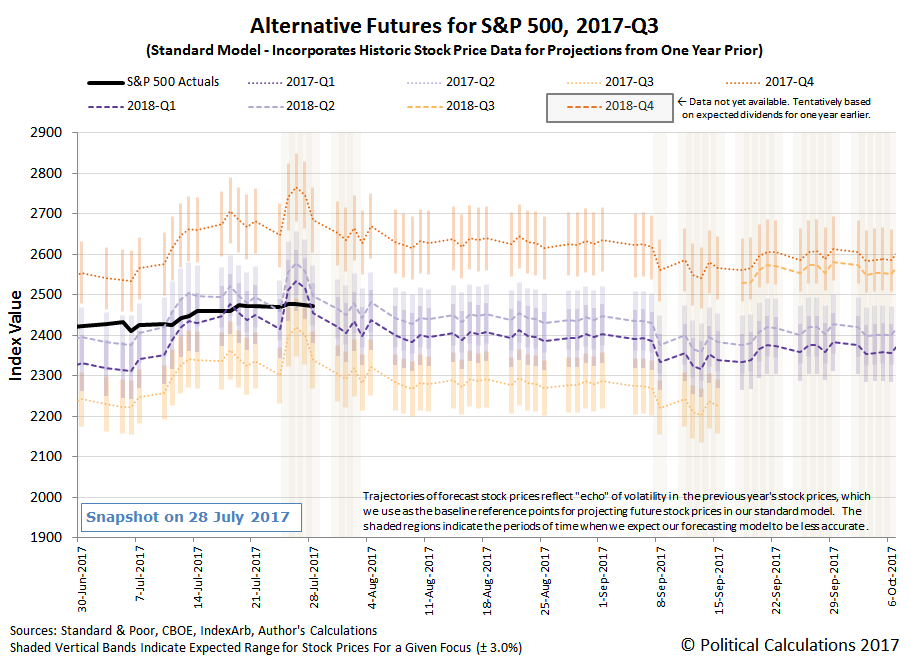 We believe that investors are focusing on 2018-Q1 in setting stock prices, which continues to be consistent with investor expectations for the timing of the next Fed rate hike.


Here are the headlines that caught our attention during the fourth week of July 2017.

Meanwhile, Barry Ritholtz covered the positives and negatives for the U.S. economy and markets. And speaking of Barry, he took part in a Freakonomics' podcast with Ken French, Gene Fama and John Bogle on the topic of "stupidest thing you can do with your money" and is also featured in Meb Faber's new book, The Best Investment Writing, Volume 1!