Political Calculations
Unexpectedly Intriguing!
September 21, 2017
How Much Do You Need to Save for Retirement?

How much do you need to save for retirement to maintain your pre-retirement lifestyle?

It's an easier question to ask than to answer because there are a multitude of factors that can affect what the right answer to the question will be for you. And that assumes that whatever answer you come up with turns out to be the right answer!

Still that doesn't stop people from asking and firms offering their retirement planning services from attempting to answer in the simplest ways they can.

The latest firm to do so is Fidelity, where they've developed the concept of using age-based savings factors to help you determine if you've saved enough at various points of your life. For the simplest estimate, all you need to get started is find the appropriate savings factor that applies for your age, multiply it by your annual income, then see how the balance of your retirement savings account compares to it. The following chart is one that they have provided for that simple math.

Seems pretty simple, right? And to be fair, the math involved is pretty simple. In the following chart, we've started with the median income earned by a typical American between the ages of 25 and 29 in 2016, then showed the inflation-adjusted savings that such an individual would have to accumulated at different points throughout their life to meet Fidelity's savings targets. The income trajectory shown for the individual is also one that Fidelity assumes, which we've listed along with a number of additional assumptions Fidelity is making.... 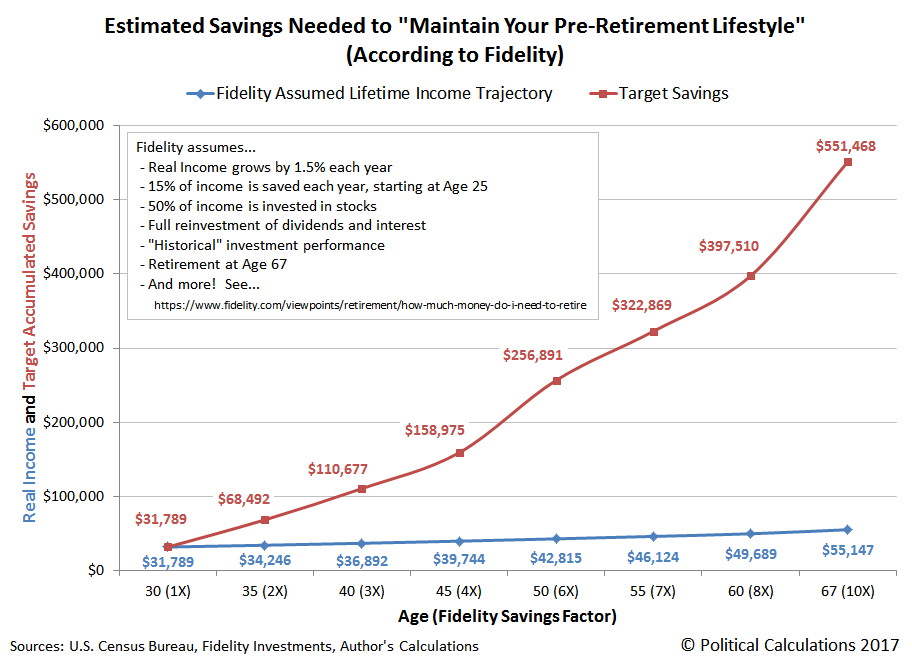 Will all those assumptions apply to you? Maybe yes, maybe no. Just for fun, we decided to play with just one of those assumptions, where instead of Fidelity's assumed 1.5% annual inflation-adjusted raise, we wondered how differently the chart would look if the individual to whom it applied was simply earning 2016's median income for the indicated age. After all, since it is the median, 50% of Americans have annual incomes above that level and 50% of Americans have annual incomes below it, so that particular income trajectory might be considered to be more representative of what a typical lifetime income trajectory for an American randomly plucked from the population at large might have, so here that chart is. 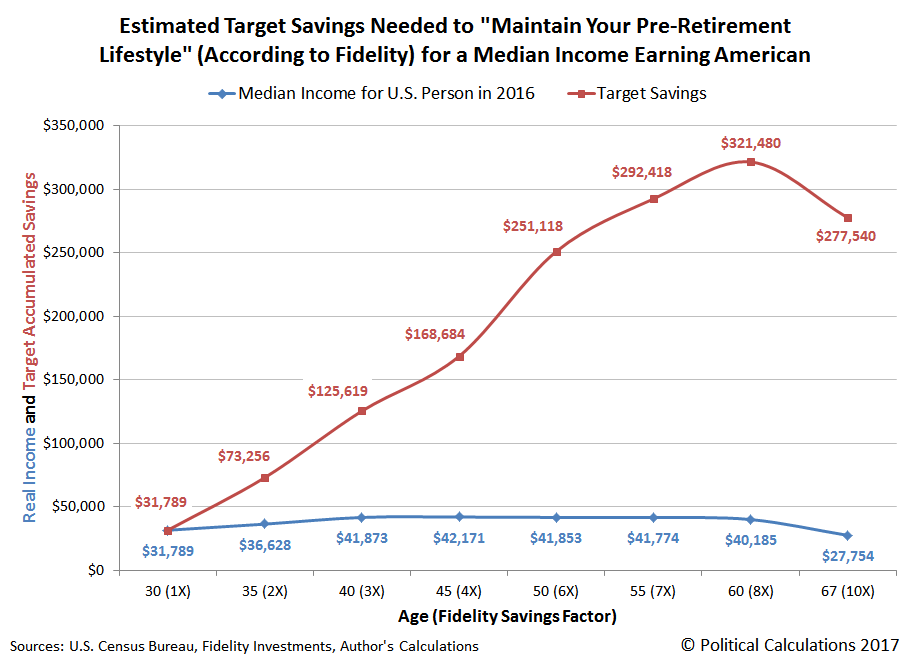 It's quite a lot different from Fidelity's assumed lifetime of annual faster-than-the-rate-of-inflation raises. So the real question is which chart better represents the kind of pre-retirement lifestyle that an American looking to retire would want or be able to maintain?

We'll leave other questions that might come up about Fidelity's assumptions, such as "can someone with this income really afford to set aside 15% of their annual income for their retirement at Age 67?", as an exercise for our readers!