U.S. stock prices during the second week of September 2017 were largely driven by two news events:

By "near future", the likelihood that the Fed would next hike short term U.S. interest rates went from last week's zero percent chance of happening anytime soon to a greater than 50% probability that they will act to make it happen in December 2017, where the CME Group's FedWatch Tool indicates that the market expects no change in rates to be announced at the Fed's meeting this week.

The effect of this new information on stock prices can be seen in our alternative futures "spaghetti" chart. 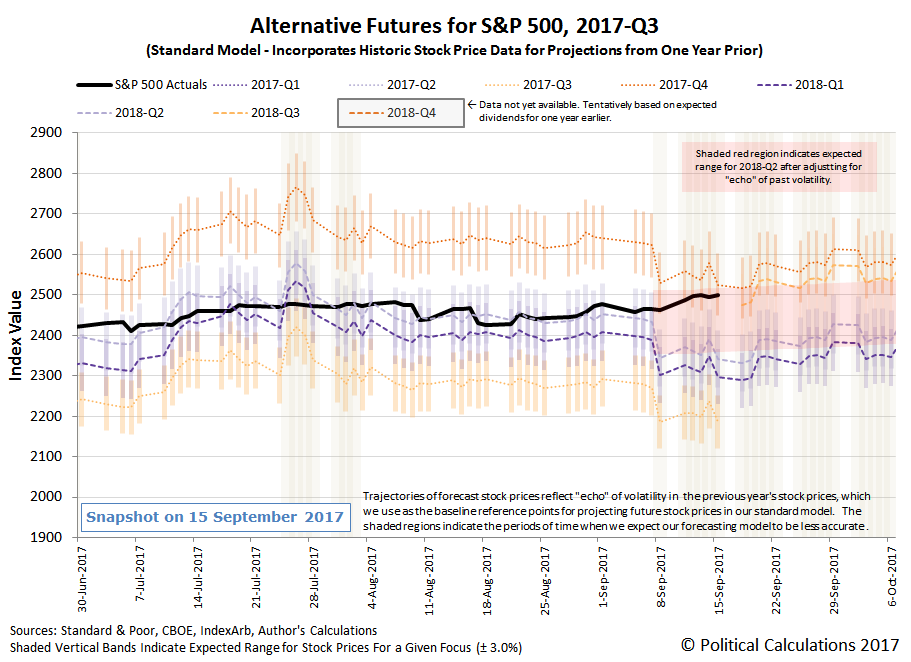 With investors shifting their forward-looking focus from 2018-Q2 to 2017-Q4, the S&P 500 rose to reach a record high during Week 2 of September 2017, although right now, the data suggests that investors are splitting their attention between 2017-Q4 and 2018-Q2, where stock prices are reaching toward the very top of the echo effect-adjusted range we indicated for 2018-Q2 just last week.

The thing to pay attention to this week that might more fully cement investor focus onto 2017-Q4 is the statement that will be issued by the Federal Reserve's Federal Open Market Comittee at the conclusion of its upcoming meeting on Wednesday, 20 September 2017, as well as the statements of individual Fed officials in the following days.

Looking backwards, here are the more signficant market moving headlines that caught our attention during Week 2 of September 2017.

Meanwhile, Barry Ritholtz succinctly summarized the positives and negatives for Week 2 of September 2017.