The S&P 500 closed the third week of September 2017 exactly 1.99 points higher than it closed the previous week of the month. In percentage terms, that's a gain of almost 0.08%!

For a week in which the U.S. Federal Reserve met and officially decided the future fate of both its balance sheet and short term interest rates in the U.S., that outcome basically meant that the Fed did just about exactly what investors expected the U.S. central bank to do.

The solidification of that view during Week 3 of September 2017 can be seen in the change in the probabilities that investors are currently attaching to the size and timing for the Fed's next announced change in the Federal Funds Rate, as measured by the CME Group's FedWatch Tool.

Compared to the previous week, the probability that the Fed's next move for its Federal Funds Rate will be to increase it from the 100-125 basis point target range it is today to the 125-150 basis point target range in December 2017, increased significantly. However, we also see that investors are not anticipating another increase above that level at this time, and if we go by our dividend futures-based model, it appears that investors are splitting the difference between 2017-Q4 and 2018-Q2 as the most likely timing for the next rate hike increase. 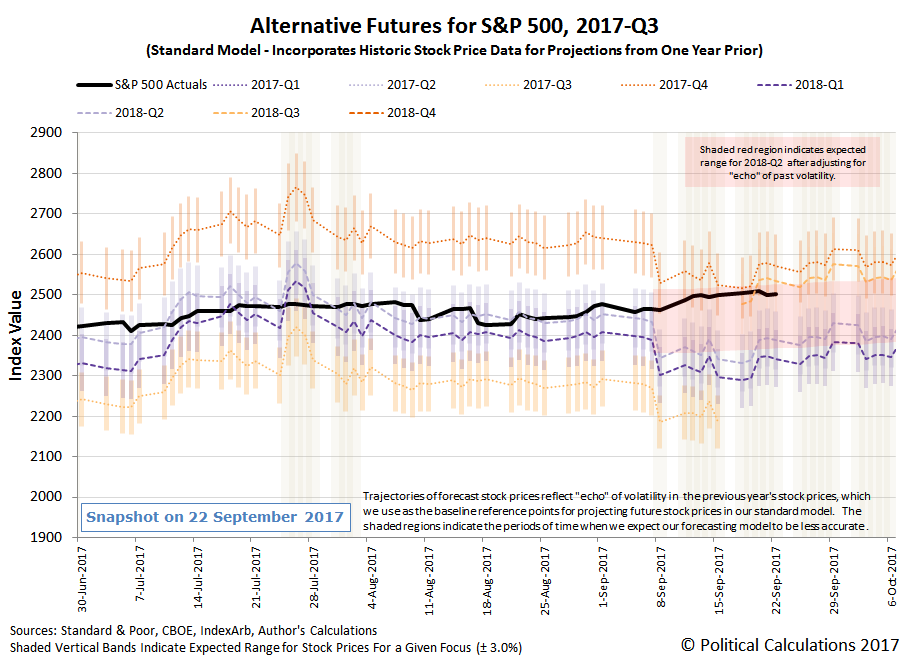 In the chart above, the red-shaded zone indicates the range where we would expect the S&P 500 to be after adjusting for the effect of past volatility of the historic stock prices that we use in our model as the base reference points from which we project future stock prices, which in this case, assumes that investors are focused on 2018-Q2, and the expectations associated with that quarter, in setting today's stock prices. As you can see, the actual trajectory of the S&P 500 is currently near the top end of that predicted range.

That suggests that investors are still focusing more of their forward-looking attention on that distant future quarter than they are on 2017-Q4, which would also suggest that stock market investors are betting that the Fed won't hike interest rates again until 2018-Q2.

This is the first time that we've seen that kind of disagreement between the CME Group's future probabilities for the Federal Funds Rate and our dividend futures-based model. We think that eventually, one or both views of the future will change so that their outlooks converge, but for now, we're in new analytical territory, where we'll have to turn to other means to see which outlook might prevail.

Speaking of which, the headlines for the week didn't offer much insight into which outlook should be given greater weighting.

What else happened during Week 3 of September 2017? Barry Ritholtz lists the positives and negatives bullet points for the U.S. economy and markets for the week that was.