The Fed did nothing with short term interest rates in the U.S. at its September 2017 meeting last week, yet the probability of a recession in the U.S. getting started at sometime in the next year ticked ever so slightly upward since the last Federal Open Market Committee meeting. 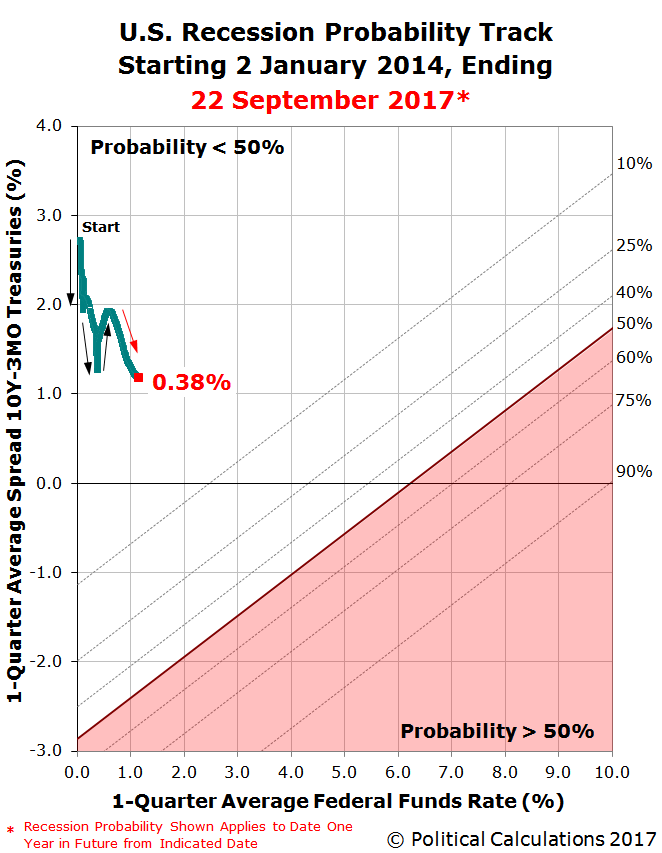 With the Federal Funds Rate still effectively set at 1.16% (the midpoint of the FOMC's current target range between 1.00% and 1.25%) and the slightly declining spread in the yields between the 10-year and 3-month constant maturity U.S. Treasuries declining slightly, the probability of a recession occurring within the next 12 months ticked up just a fraction of a percentage point to 0.38%. Or to put it more simply, there is currently very little chance that the National Bureau of Economic Research will someday declare that a national recession began in the U.S. between now and 22 September 2018 as based upon Jonathan Wright's recession forecasting method.

Perhaps the most interesting thing about what the Fed has done with short term interest rates in recent months is that it has set its Federal Funds Rate to be higher than the yields of the 1-Month, 3-Month and sometimes the 6-Month constant maturity U.S. Treasury securities. According to the textbook version of monetary policy, when the interest rate on Treasury bills is lower than the federal funds rate, banks will reduce the quantity of low-yielding Treasuries they hold and will instead increase loans to other banks, with the result that both the price of a Treasury bill rises and interest rates rise, which is exactly what we're seeing.