Tracking the growth rates of trade over time can be a valuable exercise because of what that figure can tell us about the relative health of the national economies engaged in that trade.

For example, when a nation's economy is growing more strongly than what its domestic economy can support on its own, it will import an increasing amount of goods to meet its needs. And vice versa - if a nation's economy slows down to where it's domestic economy can more fully meet its needs, the amount of goods and services that it imports will decrease.

But don't take our word for it. Just read the following excerpts!...

If anyone still needs proof that trade isn't a zero-sum game in which success depends on turning imports into exports, an examination of data for over 160 countries provides it. For almost four-fifths of countries last year, the volume of exports and imports marched together, up or down, in lockstep. Growing an economy is not a matter of turning imports into exports. Robust economies do more of both....

Taking data aggregated in the CIA’s World Factbook, for countries with a population of a half-million or more, one finds that between 2015 and 2016, 129 countries experienced increases or decreases in both exports and imports. Only 33 countries experienced an increase in one category and a decrease in the other. and only three of those rank among the world’s 25 leading exporting nations. Reduced imports do not correlate with increased exports.

The ratio is even higher for OECD countries, the so-called rich man’s club made up of developed and rapidly developing countries. Between 2015 and 2016, the volume of exports and imports moved up or down together in 29 of the 35 member countries. This was also true of all G7 countries....

Imports are not a necessary evil; they are a necessary ingredient. Companies requiring inputs toward a finished product need to get the best price, quality, and service levels they can to compete. They need the widest potential network of potential suppliers. Being able to import – and therefore obtain the best possible terms and conditions from domestic and foreign suppliers – is crucial to being able to efficiently make products for export.

In fact, the opportunity to import helps achieve productivity and prosperity more than the opportunity to export, because it does more to broaden choice. Importing widens the circle of potential suppliers competing to meet the needs of consumers and intermediate producers. It forces domestic companies to become more efficient and compete more effectively. It generates economies of scale, spreading production costs over a wider and larger market. It allows countries to utilize comparative advantage, importing goods and inputs from countries that are most efficient at making them. And it transfers knowledge, allowing importers to benefit from technological spillover.

Notice that the data to support this analysis was taken from the U.S. Central Intelligence Agency's World Factbook? There's a reason why the CIA is interested in that kind of data - it provides a window into the relative health of foreign economies, including into the world's most repressive nations, where economic information is often either tightly controlled (such as North Korea) or where the limited information that is available is of comparatively low quality (such as China).

For example, for August 2017, in calculating the exchange rate-adjusted year over year growth rate of the value of goods and services imported by the U.S. from China and imported by China from the U.S., we find that the world's two largest economies are continuing to experience robust growth. 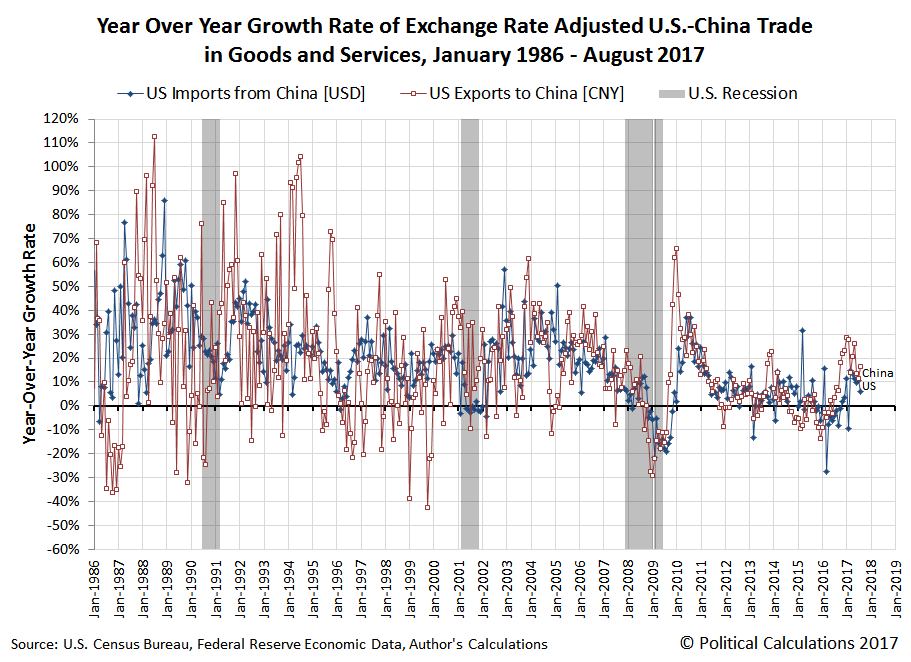 As you can see in the chart, that hasn't always been the case, where both China and the U.S. experienced recessionary conditions as recently as 2016. In China's case, that situation was something that the nation's official economic statistics obscured.

To be fair, China's national statisticians are working to improve the quality of their data as the nation has progressed toward greater openness. It's a considerable challenge.

In the meantime, we can use the export ledgers of China's trading partners to gain insight into the relative health of its economy. It's one of the advantages to the kind of double-entry bookkeeping that nations do to measure their trade balances.