It's déjà vu all over again for the probability of recession in the United States!

Just like the last time we updated our recession probability track chart, the Fed met once again, did nothing, and yet, the probability of a recession in the U.S. getting started at sometime in the next year ticked ever so slightly downward. 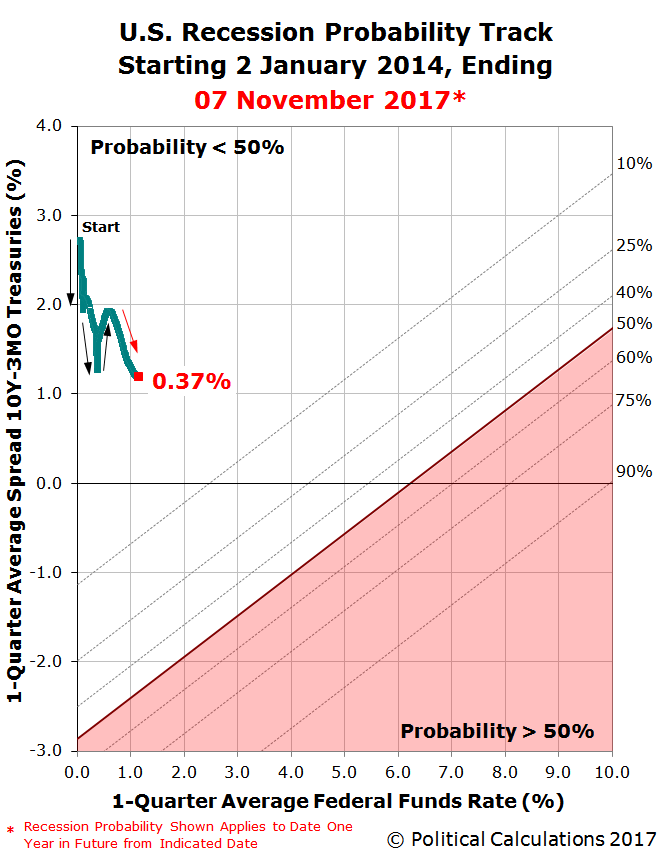 With the Federal Funds Rate still effectively set at 1.16% (the midpoint of the FOMC's current target range between 1.00% and 1.25%) and the slightly declining spread in the yields between the 10-year and 3-month constant maturity U.S. Treasuries declining slightly, the probability of a recession occurring within the next 12 months dropped just a fraction of a percentage point to 0.37% from the 0.38% where we last estimated it.

As such, there is currently very little chance that the National Bureau of Economic Research will someday declare that a national recession began in the U.S. between now and 7 November 2018 according to Jonathan Wright's recession forecasting methods.

We do expect that to change after the end of the Fed's upcoming meeting on 13 December 2017, where the Fed's Federal Open Market Committee is expected to hike the Federal Funds Rate up to a new target range between 1.25% and 1.50%. When that takes hold, we would expect the probability of recession to slightly increase, assuming all other factors remain unchanged.

But what are the odds of that?!