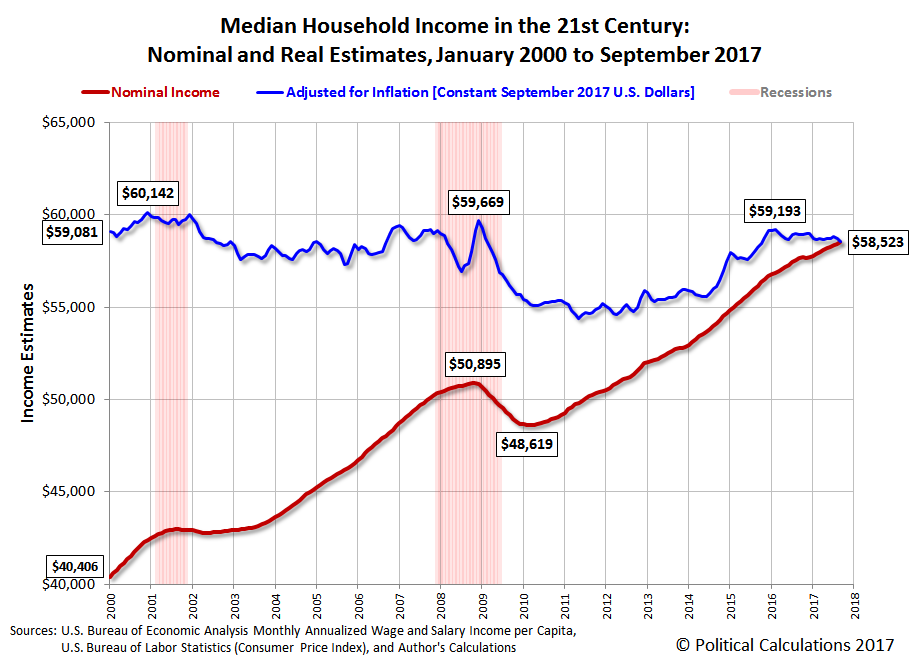 In terms of current U.S. dollars, the most recent trend for median household income in the U.S. has been slowly rising since January 2017. However, after adjusting the nominal income data to be in terms of inflation-adjusted, constant September 2017 U.S. dollars, we can see that since January 2017 has trended mostly flat until recent months, where it has recently dipped thanks to the higher rates of inflation recorded since July 2017.

We believe that most of that change reflects recent increases in the price of oil following the supply disruption of domestic U.S. production following Hurricane Hugo combined with an increase in foreign demand since the end of June 2017, which has reversed what had been a downward trend for these prices.

For the just released personal income data, the BEA revised the figures for just the previous two months from their previously reported levels, which we've updated in this month's chart. As in previous months (or at least since June 2017 when we began posting our monthly estimates of median household income, the magnitude of the revisions continue to be tiny (on the order of +/-0.04%), with minimal impact to our estimates from one month to the next.

On a final note for this month, we discovered that our monthly median household income estimates have been incorporated into Requisite Press' Auto Buyer's Affordability Index, which they indicate is "a consumer-focused measure of average new-car price affordability. The purpose of the index is to provide regular, on-going consumer awareness of affordability considerations for improved household financial health."

Kind of like what we do for median new home sale prices in the U.S., but for cars - check it out!