The Federal Reserve did the completely expected yesterday and announced that it would increase the Federal Funds Rate, the interest rate that U.S. banks charge when loaning money to other banks overnight, by a quarter percent, raising its target range for the Federal Funds Rate to now be between 1.25% to 1.50%.

Using the FOMC's announcement to take a snapshot in time of the probability of recession in the United States, we find that through 13 December 2017, it has ticked slightly up from our last report to 0.40%. 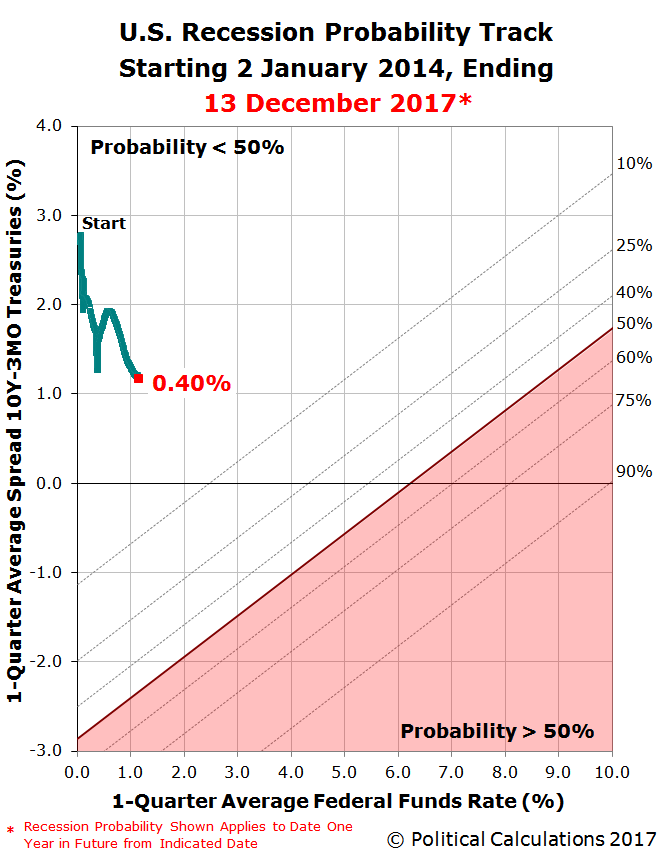 With the Federal Funds Rate still effectively set at 1.16% (the midpoint of the FOMC's previous target range between 1.00% and 1.25%) and the slightly declining spread in the yields between the 10-year and 3-month constant maturity U.S. Treasuries, the probability of a recession occurring within the next 12 months dropped just a fraction of a percentage point to 0.40% from the 0.37% where we last estimated it.

As such, there is currently very little chance that the National Bureau of Economic Research will someday declare that a national recession began in the U.S. between now and 13 December 2018 according to Jonathan Wright's recession forecasting methods.

That doesn't mean however that all parts of the U.S. will be recession free. As we've seen in recent years, parts of the U.S. may indeed experience what we've described as a microrecession, where some degree of economic contraction has occurred, but which lacks the combination of scale, scope and duration needed for the NBER to recognize a recession at the national level.