Even though the Federal Reserve's Federal Open Market Committee voted to hike short term interest rates in the U.S. by a quarter percent on Wednesday, 13 December 2017, the biggest news of the week, as far as the U.S. stock market was concerned, came on Friday as the congressional majority Republicans announced they had reached a compromise between the House and Senate versions of the corporate income tax cut bill, where a vote would be scheduled during the next week.

Combined with the news that Senate Republicans who had been holding out support for the bill, which will also reduce personal income taxes for a majority of working Americans, were going to support the compromise, investors provided the S&P 500 with what we would describe as a noisy speculative boost on Friday, 15 December 2017. 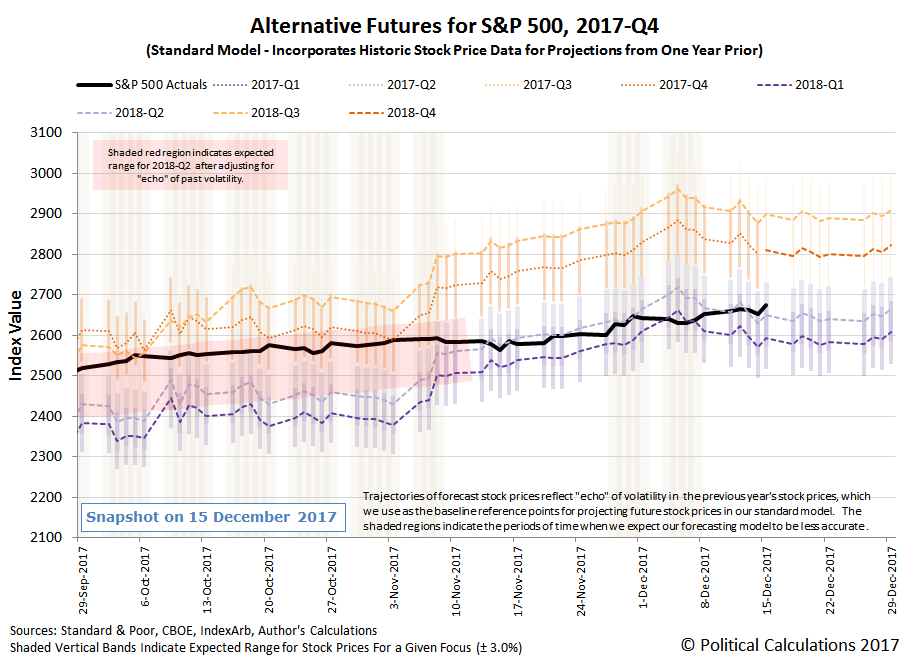 Overall, although our chart shows stock prices seeming to follow along the alternative trajectory associated with investors being focused on 2018-Q2, we think that they are really focused on 2018-Q1, which would coincide with the most likely timing of the Fed's next expected rate hike, where the positive speculative noise from the tax cut deal is boosting the S&P 500 to the top end of the range that we would expect if they were primarily focused on that future quarter.

Meanwhile, we weren't kidding when we said that there wasn't much other news of note that could drive the market in the second full week of December 2017. Here are the headlines that we felt qualified as noteworthy during the week that was.

Finally, Barry Ritholtz lists the positives and negatives for the U.S. economy and markets in a succinct summary of the markets and economy news for Week 2 of December 2017.