Coming before a prolonged holiday week in the U.S., we suspect that this may be the least read of any post appearing on Political Calculations during 2017, but we'd like to knock it out before we go on our own year-end holiday, where we have just one more post after this one to present in 2017, in which we'll reveal the biggest math story of the year that was!

Until then however, let's check in with how our dividend futures-based forecasting model for the S&P 500 worked during the third full week of December 2017. The following chart shows where the actual trajectory of where the S&P 500 tracked against the background of our model's spaghetti-chart forecasts. 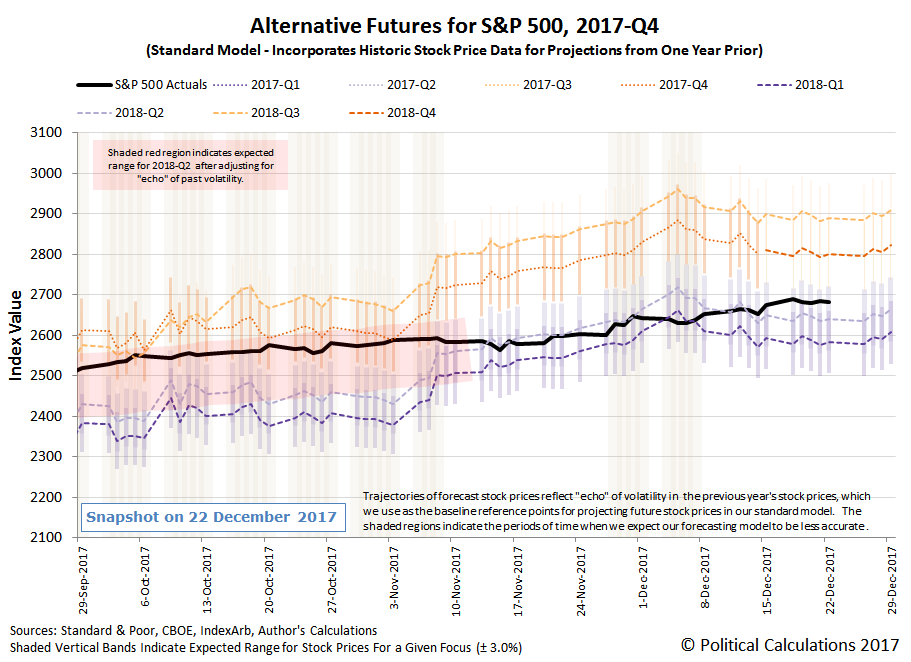 Week 3 of December 2017 is when the Tax Cuts and Jobs Act of 2017 officially became law, with President Trump signing the measure on Friday, 22 December 2017. Based on Federal Funds Rate futures, we believe that investors are currently mostly focusing on the first quarter in setting stock prices, where options speculators are betting that the Federal Reserve will act to boost short term interest rates in the U.S. again shortly before the end of that quarter.

We suspect that stock market investors are speculatively pricing in higher dividends in the future resulting from the tax cut, which have yet to materialize in the dividend futures themselves, where we are seeing the actual trajectory of the S&P 500 tracking along above the range we would expect if investors were closely focused on 2018-Q1 in setting stock prices based on the level of dividends that are currently projected for that future quarter.

That's not necessarily a bad speculation, where a number of U.S. firms have already announced that they will use the opportunity of the tax cut to increase the pay of their employees, whether through bigger paychecks or through bonuses.

We'll find out, most likely in 2018 after the boards of directors of S&P 500 companies have had the chance to meet and make decisions on how they might adapt their compensation and dividend payout policies to respond to the tax cut, how smart that speculation may be.

Until then, for our last post looking at the S&P 500 of 2017, we'll close by wrapping up the week's market moving headlines in the following package....

Elsewhere, Barry Ritholtz succinctly summarized the positives and negatives for the U.S. economy and markets for Week 3 of December 2017.

That's it for now - we'll be back sometime tomorrow with our special last post of 2017!