2017 marked something of a turnaround for the fate of dividends paid by publicly-traded companies throughout the year. What had been a multi-year declining trend for the U.S. stock market since mid-2014 appeared to bottom out between March and June 2017, before reversing into an improving trend throughout the rest of the year. 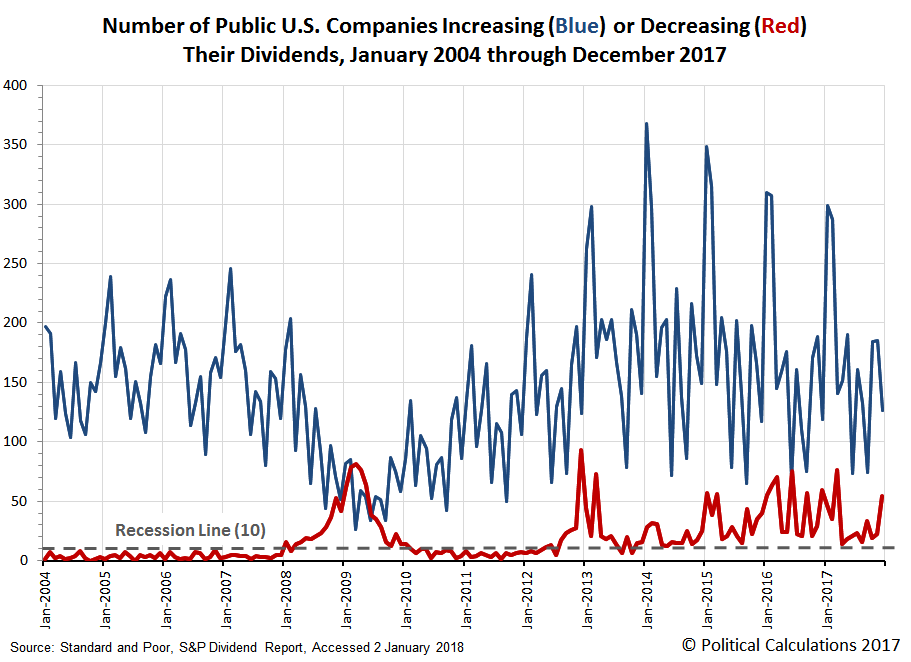 Let's drill down into December 2017's numbers, before we comment on some unique developments in the last month of the year that was.

Here's why. The passage of the Tax Cuts and Jobs Act of 2017 is particularly beneficial for investors in companies that directly pass through income from their business operations to their shareholders, such as Real Estate Investment Trusts (REITs), where if they act to delay taking those dividend payments until after the law goes into effect in 2018, means that they can significantly increase their after-tax returns.

The tax plan features a deduction for pass-through businesses—income derived from commercial activities that their owners or shareholders pay on their personal income taxes. That deduction includes the income that flows to REIT investors through dividends—mainly from rent or mortgage interest—but not the capital gains secured when properties are sold.

The plan allows investors to deduct 20% of the income, with the remainder of the income taxed at the filer’s marginal rate. It is available even if the taxpayer doesn’t itemize deductions.

Shareholders of REITs who now pay the top income-tax rate of 39.6% on dividends received would see that rate drop to 29.6%, according to Nareit, formerly the National Association of Real Estate Investment Trusts.

“Clearly this is a deduction that will lower the overall tax rate for individuals who invest in REITs,” said Dianne Umberger, the REIT leader for Ernst & Young’s National Tax Department.

The new provision would keep REITs an attractive vehicle for real-estate investors, and could fuel additional demand for REIT shares. That’s because investors who earn rental income outside of REITs could be subject to taxes at the top rate of 37% under the new bill but just 29.6% through a REIT.

The distribution of capital gains from REITs will continue to be taxed at 20%, according to Nareit.

“There has never been a lower rate of tax for rent and mortgage interest received through REITs,” said David Miller, a partner in the tax department of Proskauer Rose LLP. “This is unprecedented.”

For the managers of REITs with the ability to easily change when they might pay out their scheduled dividends to maximize the benefits for their shareholding owners, the passage of the Tax Cuts and Jobs Act provides a particularly strong incentive for them to:

We see all three of these actions that would boost the after-tax dividend payouts to investors taking place to some degree in the data for December 2017, where we're really looking forward to what happens next for dividends in 2018. The only previous period for which we have data that shows similar dynamics was in the period from December 2012 through March 2013, when the threat of a massive tax hike on dividends spurred the Great Dividend Raid of 2012, and where the subsequent fiscal cliff tax deal in January 2013 led to dividends being increased because they would be taxed more favorably than regular income, which was a factor influencing the decisions of highly influential investors who could choose how much to be paid in either salaries or dividends.

On a final note, the number of firms omitting or suspending their dividends in December 2017 also includes a number of California utilities, such as Edison International (NYSE: EIX) and Pacific Gas and Electric (NYSE: PCG), which face liability risks from the wildfires that burned large tracts of land in the state.

With luck, they'll rebound to where they can resume paying dividends to their shareholders by the end of 2018, but the costs and penalties they can expect to be dealt in California's hostile legal and regulatory environment before that might happen will likely be substantial.