The risk of a national recession beginning in the United States anytime in the next year, or specifically between 30 January 2018 and 30 January 2019, is slightly over 0.5%. That value is about a tenth of a percentage point higher than our previous report on the topic about a month and a half ago.

Normally, we would have waited until after the Fed completed its end-of-January meeting before updating our recession probability track, but we decided to jump the gun given the sudden increase in volatility in the U.S. stock market, which is in part tied to rising yields for U.S. Treasuries.

Rising bond yields are starting to compete with stocks that pay some of the biggest dividends, leaving these companies behind even as the stock market has rallied to new highs.

The S&P utilities sector is down about 10% since the end of November and the real-estate sector has fallen 4.9%, sharply underperforming the S&P 500’s 6.6% rise. Companies in both groupings typically pay out big dividends relative to their stock prices, giving them high dividend yields.

For years, investors poured money into high-dividend stocks as they sought investment income that outpaced superlow yields in the bond market, which were held down by the Federal Reserve’s low-rate policy. But the central bank is reversing course, leading to a rise in bond yields that has accelerated in recent days.

For our recession probability track, that means momentum has been building for a potential reversal in the downward component of its trajectory toward increased odds of recession. 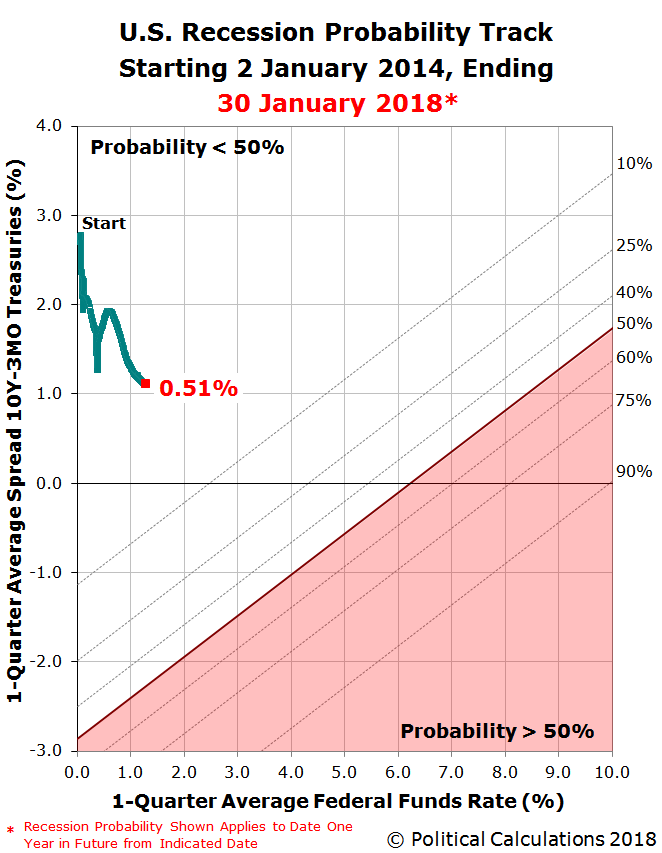 That change will take some time to show up in the chart, where we're showing the trailing quarter average values for both the spread between the 10-Year and 3-Month Treasuries and the Federal Funds Rate. Meanwhile, the Fed is currently expected to increase the Federal Funds Rate by a quarter percentage point in March, then again in June and again in December 2018, so we would expect see the rightward component of its trajectory continue.

The Fed's hiking should also increase the yields of the 3-Month Treasury faster than longer-term Treasuries, so it's quite possible that the Fed's rate hiking will contribute to shrinking the size of the spread between long-term and short-term Treasury yields, offsetting the growing spread between the two in today's bond markets. At the very least, we'll have an interesting dynamic to watch to see which forces are winning out at any given point of time.

Fortunately, as it appears today, there is currently minimal risk that the National Bureau of Economic Research will someday declare that a national recession began in the U.S. between now and 30 January 2019 according to Jonathan Wright's recession forecasting methods, which provides the basis behind our recession probability track.