It was just two and a half weeks ago when we declared that a relative period of order had come to an end in the U.S. stock market. What we left unsaid however is that whenever the market leaves order behind, it is taken over by the more chaotic elements of its nature, which is a concept that we presented less than a month and half ago.

So we cannot say that we were terribly surprised to see such rapid and large changes in the S&P 500 after having observed its previous period of order break down. The following chart updates the one we presented just two and a half weeks ago to show where the S&P 500 sits as of the close of trading on 5 February 2018 with respect to that previous period of relative order. 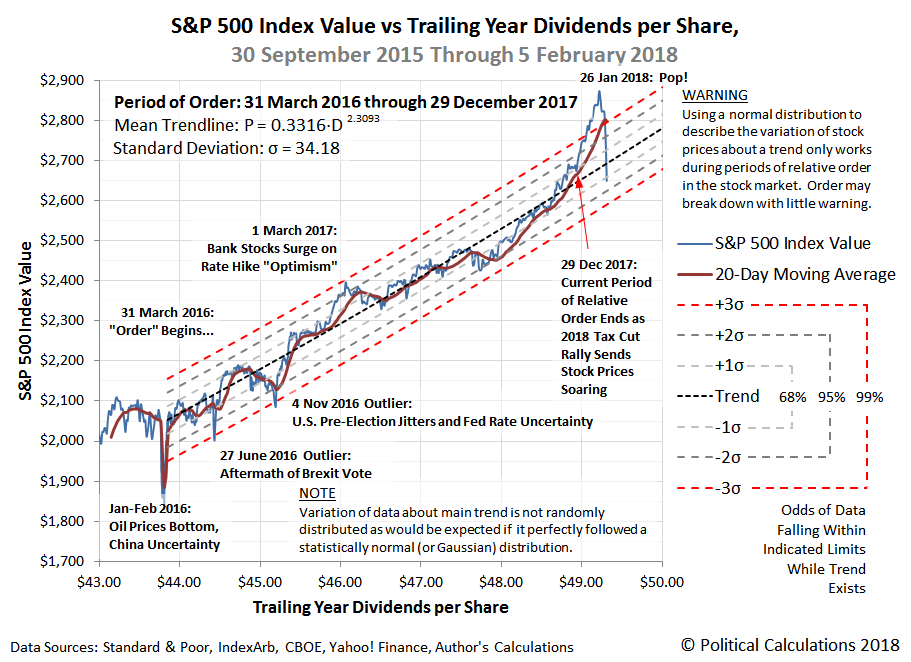 In our previous discussion, we had compared the breaking of order in the S&P 500 with the bubble that formed in the U.S. stock market after the passage of the Tax Relief Act of 1997, arguing that the current day break in order wasn't of the same nature as that previous chaotic episode. Events have since proven that observation to be correct - it's definitely not the same kind of disruptive, chaotic and sustained event.

There is however another previous episode when order broke down in the U.S. stock market that is a more relevant event for comparison, which was likewise prompted by another significant tax reform law. In this case, we need to go back in time another 11 years to the passage of the Tax Reform Act of 1986, which like the Tax Cuts and Jobs Act of 2017, prompted the stock market to tear sharply upward at the beginning of the calendar year, before having their supports cut out from under it sending stock prices crashing. We've tapped our archives for the following chart, which shows how that played out in what became known as the Black Monday Crash of 1987: 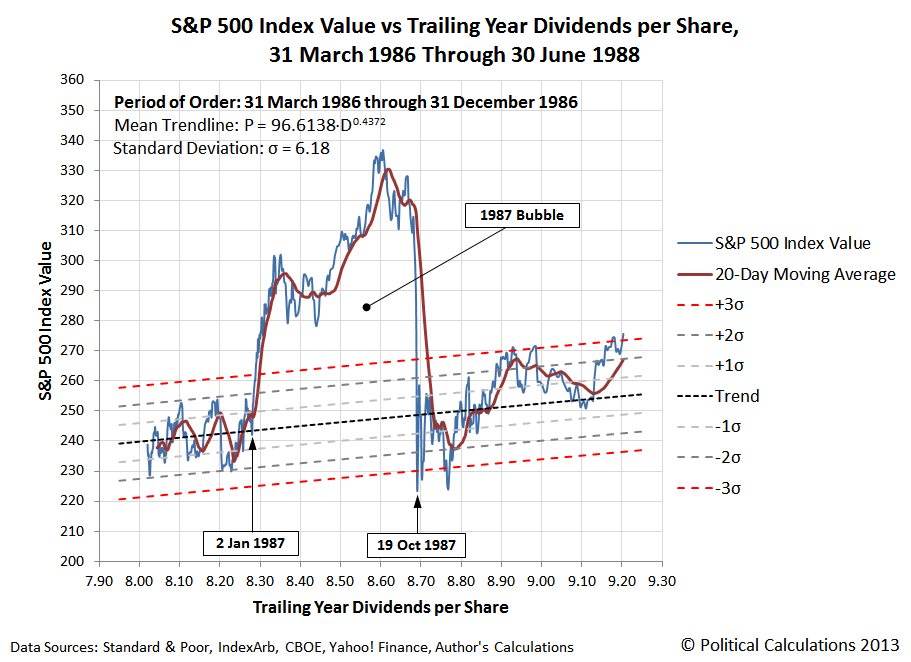 Here's how we described what led to the 1987 stock market bubble and the Black Monday crash, in a post where we considered the question of What Happens to Stock Prices When the Bond Buying Party Ends, which the Federal Reserve's outgoing chair Janet Yellen has chosen to make directly relevant to today's stock market environment:

There are two parallels for the Stock Market Noise Event of 2011 in the post-World War 2 era. First, the crash of stock prices from 29 May 1946 through September 1946, which coincided with the maturation of the Victory bonds that Americans bought in the weeks following V-E Day on 8 May 1945, all the way up through V-J Day on 2 September 1945, which promoted a year-long QE-like driven surge in stock prices. Here, the bubble in stock prices lasted exactly one year since that was the minimum holding period required before the war bonds bought during this three-month long window of time could be redeemed.

The second parallel is the 1987 Black Monday stock market crash. Here, there had been a similar surge in bond buying, which set records in January 1987, complete with a coinciding surge in stock prices. Just like in August 2010 and just like in May 1945. Stock prices remained elevated for months on expectations of improved earnings, but ultimately crashed after the Federal Reserve jacked up interest rates as the forward-looking expectations that had initially supported higher stock prices changed. The result was that stock prices reset themselves by shifting down to a lower upward trajectory. Just like in 2011, and also just like in 1946.

Which is what we should expect to happen given the quantum-like properties of stock prices.

The biggest difference between 1987 and 2018 is that in 2018, the U.S. Federal Reserve didn't wait ten months to pop the bubble that formed in the market following the immediate stimulus from tax reforms.

As for what comes next, that will be up to the Federal Reserve, which will likely soon find itself having to fight what Tuomas Malinen has creatively called the Ghost of 1987, albeit with a less effective set of weapons in its arsenal in 2018. We'll find out in pretty short order how the new chair of the Fed, Jerome Powell, who was just sworn in yesterday, will tackle his first on-the-job crisis.