Political Calculations
Unexpectedly Intriguing!
02 February 2018
The Social Network of the Battle of Clontarf 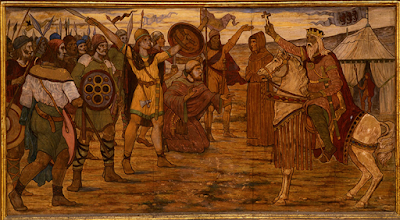 A little over a thousand years ago, the Battle of Clontarf was a seminal event in Ireland's history, where the island's warring Celtic kingdoms, which had only recently been compelled to unite under the rule of High King Brian Boru, met and prevailed over Viking invaders in a day long battle.

Or perhaps not. Perhaps instead, the Battle of Clontarf was the final battle of a civil war between Celtic chieftains in Ireland, where Viking warriors were mixed in among the warring clans. The Vikings had, after all, taken control of territory they had raided and had established settlements on the island over the previous two centuries, where they had long intermingled with the Celtic population and were an active political force that would frequently choose sides in the battles between divided Celtic kingdoms.

One millennium later, many of the details of the nature of Celtic and Viking interactions have been lost to time, where traditional historical records and archaeological evidence provides support for these alternative perspectives of the same event. But the branch of mathematics involving graph theory is providing a new window into history that may have resolved the question of the true nature of the conflict that culminated at the Battle of Clontarf, through the analysis of the social networks described in the surviving documents from the era.

The primary account of the war between ancient Irish and Vikings, appropriately titled the Cogadh Gaedhel re Gallaibh, or The War of the Irish with the Foreigners, lists the travels, meetings, and battles of Irish kings and Viking warlords for nearly half a century. But the sprawling epic, collated from three different sources, is problematic. Historians aren’t sure exactly when it was written, its timeline makes no sense, and it’s a brilliant piece of propaganda that demonizes the Vikings. “It basically says Brian was a good guy and the Vikings were bad guys,” says the study’s lead author, Ralph Kenna, an Irish theoretical physicist and mathematician at Coventry University in the United Kingdom.

So Kenna turned to social network analysis—the kind Facebook uses to figure out who your friends are—to analyze the relationships between characters in the Cogadh. Sindbæk says that although this method is used increasingly in anthropology, applying it to characters in ancient texts is quite ingenious. Kenna and colleagues mapped out every interaction among the 315 characters mentioned in the Cogadh, and coded their more than 1100 interactions as either friendly or hostile. They then tallied the hostile interactions into a single scorecard: If the nastiness was Irish-on-Irish, the score went up. If it was Irish-on-Viking, the score went down. The final score was negative. That means it’s quite likely that the war really was a struggle primarily against the Vikings, Kenna’s team reports.

The study's authors presented an overview of the kind of insights that can be obtained from this application of graph theory back in 2014 in the following video.

Very cool! No word yet on whether they'll tackle Game of Thrones next, but at least for the Battle of Clontarf, the math strongly favors the Irish versus Viking invaders version of events, while also confirming that Viking interactions with the Celtic population were more complex than just being straightforward adversaries.