If you went by the media's reports on the U.S. trade deficit, you might think that the U.S. economy was in a bad position because it imported a record amount more than it exported in December 2017.

The U.S. trade deficit widened more than expected in December to its highest level since 2008, as robust domestic demand pushed imports to a record high, adding to the stiff headwinds faced by the Trump administration’s “America First” trade policies.

The import-driven surge in the trade gap reported by the Commerce Department on Tuesday also suggests 3 percent annual economic growth may be hard to achieve. Imports, which subtract from gross domestic product, could get a further boost from a $1.5 trillion tax cut package that became effective in January.

But surprisingly, China didn't appears to be a major culprit in the last month of 2017, even though the U.S.-China trade deficit "jumped to a record $375.2 billion" overall in 2017.

Exports to China surged 7.5 percent to a record high in December. As a result, the U.S.-China trade deficit declined 13 percent in December.

What does that look like in terms of the year over year growth rate of the value of trade between the U.S. and China? The following chart shows the answer (along with 383 additional months of historic U.S.-China trade data!): 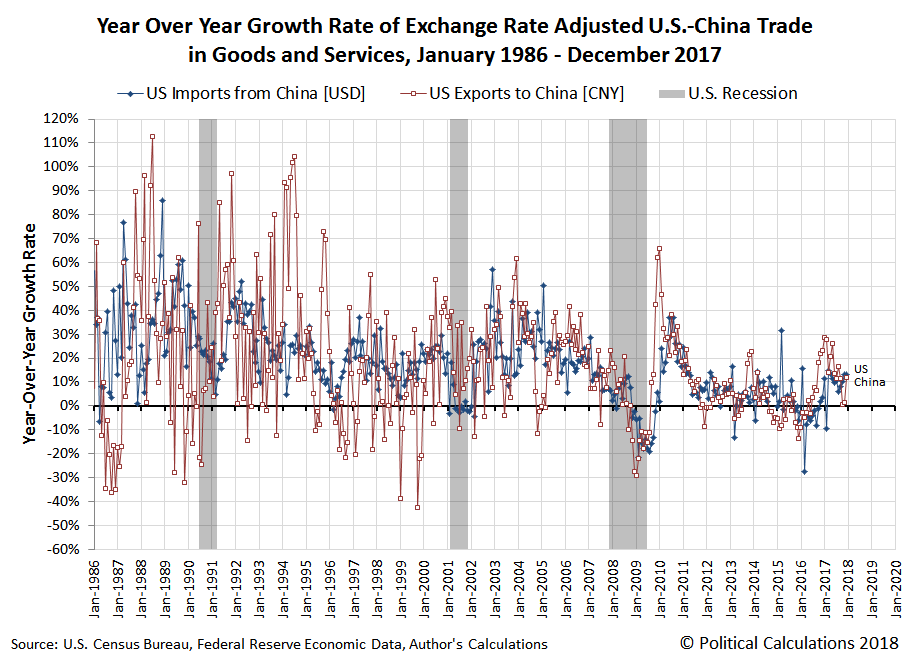 We find that the year over year growth rate of U.S. exports to China jumped upward in December 2017 after having dipped in the previous two months to near-zero growth levels. That dip is somewhat misleading, because it is largely attributable to a year-over-year decline in America's soybean exports to China that typically peak in the months of October through December each year, where these months in 2016 had seen all-time record levels of U.S. soybeans go to China. 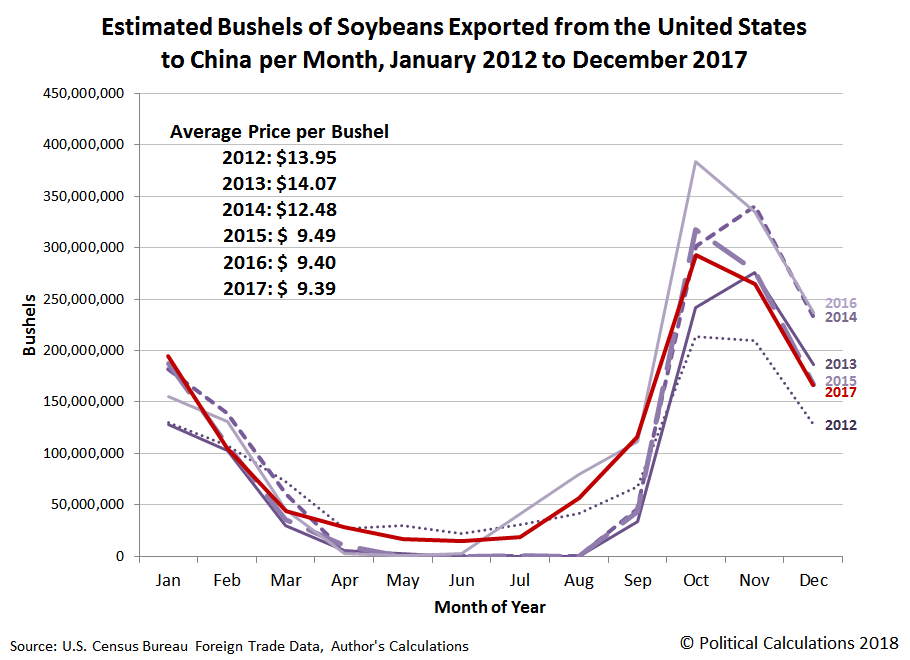 Looking back at the year over year growth rates, we see that the magnitude of the rebound in the growth rate of U.S. exports to China in December 2017 nearly matches the year-over-year increase in the U.S.' imports of goods from China, which confirms a strong close to 2017 for both China and the U.S. At the same time, we see that 2017 was good for both nations.

But don't take our word for the U.S. side of the trade ledger. AEI's Mark Perry read the same trade data, and even more dismal media reports, before arriving at a similar conclusion:

But all we hear about is how rising imports and trade deficits are a drag on economic growth, and how the goal should be to stimulate exports to increase output and jobs. And yet rising imports can be a sign of economic strength for US firms, with a positive effect on US jobs. As a hypothetical example, suppose that US imports of foreign-made auto parts (or steel) are increasing. Why would that be? It’s only because US automakers or the foreign transplants that now manufacture 21 different vehicles in the US are expanding production in the US. And to expand domestic production requires more US autoworkers. Therefore, the fact that imports rose to an all-time high in December is consistent with a US economy that is expanding, both for output and employment. And that’s exactly what we see from the data – jobless claims adjusted for the population are at an all-time historical low, the 4.1% jobless rate is the lowest since 2000 (and likely headed lower), retail sales are up 9.0% annualized over the past six months through December, and January’s ISM Manufacturing and Non-Manufacturing indexes just hit the highest readings for a January in seven and 14 years respectively. In January, hourly earnings were up 2.9% from a year ago, the best reading since 2009. Private payrolls were up 196,000 in January for the past twelve months, and full-time employment has grown by 2.39 million jobs while part-time employment is down 92,000! The are now 5.8 million unfilled jobs and quit rates are at the highest levels of the recovery. Lots of evidence of both strong economic growth and job growth!

Perry suggests a solution for better seeing the importance of both imports and exports in indicating the relative health of a nation's economy:

We have the monthly data going back to January 1985 - let's try it with the U.S-China trade figures through December 2017: 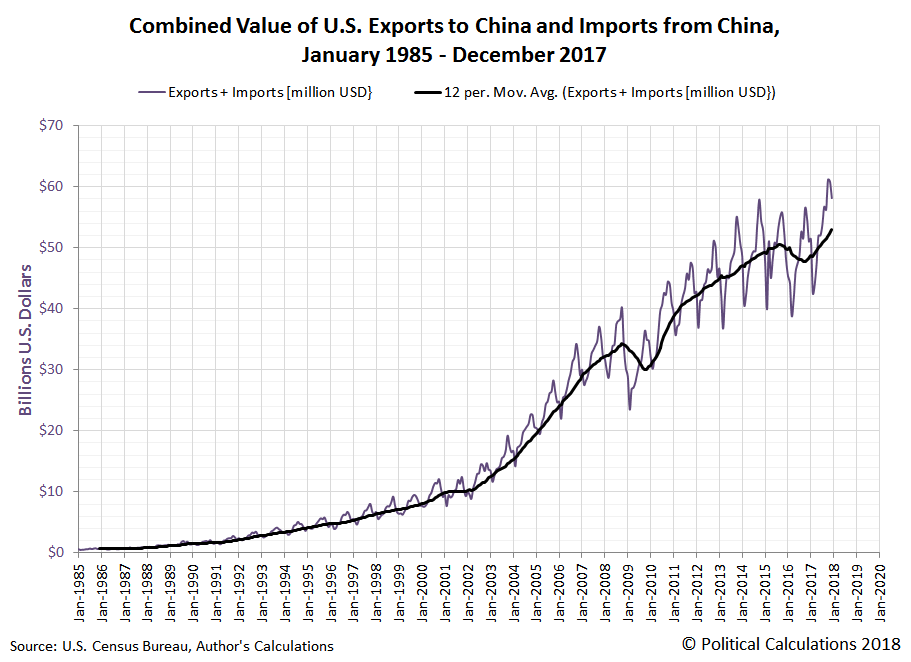 In the chart above, we see that for both nations, the total volume of imports and exports between the U.S. and China rebounded strongly in 2017, as both nations' trade volumes showed robust growth as they recovered from a depressing 2016. This is definitely not the dismal economic picture being portrayed in the media.

We'll close by noting that Perry features a chart showing the combined total of the value of all of the U.S.' imports and exports in his post on the topic, so if you're looking for a chart with that data, here's where you'll find it with data from 2004 through 2017.