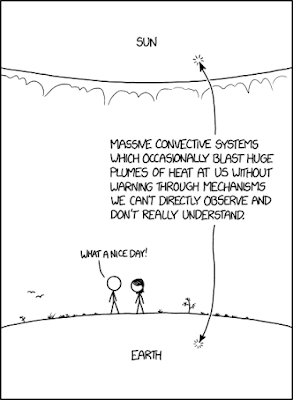 By now, and by now we mean about two weeks after the summer solstice, if you're a resident of the Northern Hemisphere, you're probably hearing quite a lot about how hot it is this summer.

How hot it is depends upon many factors, but the primary contributor to raising the Earth's temperature above the absolute zero of deep space is the Sun.

So how much heat does this giant gaseous nuclear fusion-powered fireball, which is rumored to be hauled across the sky each day on a barge, or perhaps towed across the heavens by a chariot, bring to what we feel as the heat of summer?

We're about to find out, and we'll do it in a way that you can substitute the default data with the data that applies for any star or planet. The following tool will take you from temperature at the surface of the sun all the way out to the orbit of the Earth to calculate the average temperature that the Sun's heat contributes to the planet.

For the default data, we've indicated the Earth at its farthest point of its orbit from the sun, which it reaches about two weeks after the summer solstice for the Northern Hemisphere, or for our date of publication, where it is today! The other data is the average values for the indicated quantities provided by NASA in its planetary fact sheets.

If you're accessing this article on a site that republishes our RSS news feed, you may need to click through to our site to access a working version of the tool.

You've probably noticed that the results of our math have the temperature of the Earth somewhat on the cold side. That's because this basic math only considers the contribution of the sun and ignores the greenhouse effect contributed by the Earth's atmosphere and oceans, which on average "increases the surface temperature by some 40 K over the blackbody temperature" of the Earth, which is what our tool calculates!

If you'd like to try the math for other planets, here's where you can find the relevant data for the ones that share Earth's solar system. And don't be afraid to alter the temperature and size of the sun either!