Political Calculations
Unexpectedly Intriguing!
September 10, 2018
The S&P 500 Backs Off Its Record High in Week 2 of September 2018

The S&P 500 (Index: SPX) declined during the second week of September 2018, where the prospects for escalating interest rates in the U.S. and for tariffs to negatively impact the earnings of the S&P 500's largest component closed the week on a low note.

While news related to the increased likelihood of rate hikes continuing longer than had previously been expected was spread out over the week, the trade news was concentrated on Friday, where ZeroHedge captured the negative sentiment from the market's reactions to the day's trade-related news the way that only the Tylers can.

And yet, the damage to the overall S&P 500 wasn't as bad as it could have been, with the magnitude of the daily negative changes falling well within the market's typical day-to-day volatility. 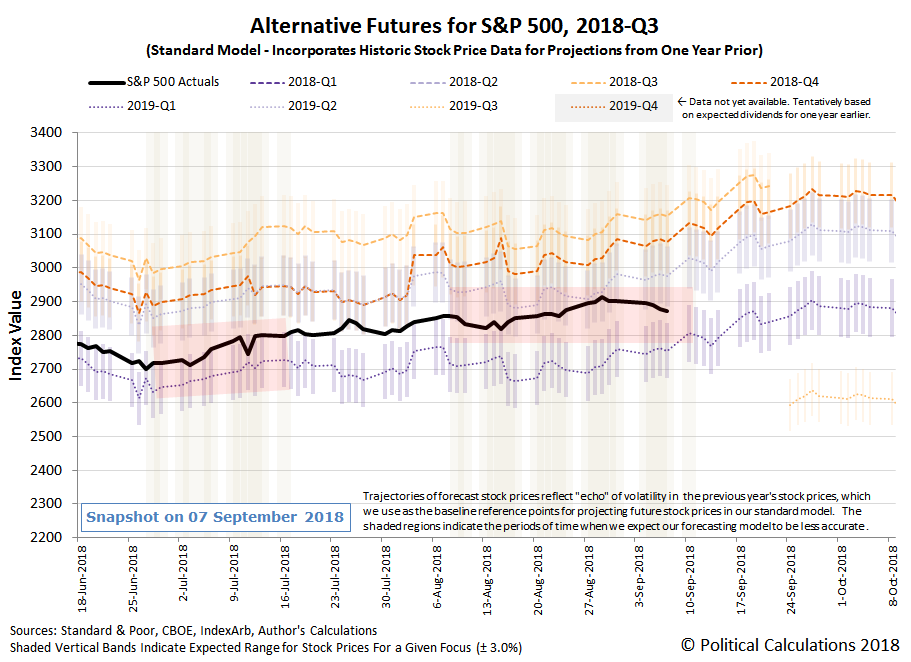 Unless something changes dramatically before the end of Tuesday, 11 September 2018, the redzone forecast that we first introduced back on 13 August 2018 is set to expire without the trajectory of the S&P 500's daily closing value having fallen anywhere outside of it while it ran.

When it does expire, we anticipate that the level of the S&P will be consistent with investors looking forward to the future quarter of 2019-Q1. At least, in the absence of a news or noise event that might prompt them to suddenly focus on another point of time in the future and the expectations associated with it as they go about setting current day stock prices.

As for what might influence investors to shift their forward-looking focus, here are examples of kinds of things that we look for from the news of the Labor Day holiday-shortened second week of September 2018.

Meanwhile, the week's trade data and President Trump's threats of new tariffs both made the negative side of the ledger in Barry Ritholtz's succinct summary of the positives and negatives in the week's broader news of the economy and markets.