Political Calculations
Unexpectedly Intriguing!
November 12, 2018
Celebrating the End of the 2018 Midterm Election in the S&P 500

The big news last week, aside from the U.S. midterm elections, which apparently are still going on in some places, was the stock market’s response to the return of political gridlock on Capitol Hill, where stock prices rallied strongly enough on the day after the election that they completed the fourth Lévy flight event of 2018, as investors fully returned their forward-looking attention to 2019-Q1 after having devoted all their attention to 2019-Q3 in the previous week. 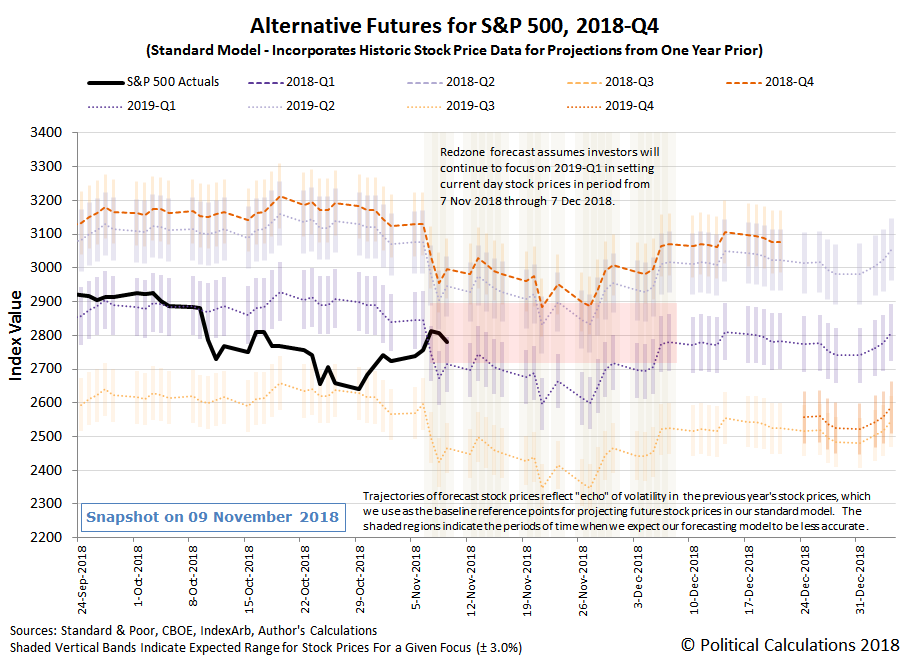 Since our dividend futures-based model uses historic stock prices as the base reference points from which we project future potential values for the S&P 500, the recent Lévy flight events have significantly skewed our model’s projections in the period from 7 November 2018 through 7 December 2018. To compensate for what is, in effect, the echo of past volatility in our model's forecasts for the future the S&P 500, we've added a new redzone forecast to our regular spaghetti forecast chart for the S&P 500, where we've assumed that investors will maintain their focus on 2019-Q1 over this period of time.

Now, just because we've assumed that doesn't mean they will. If they don't, then our first potential confirmation that they have shifted their attention toward a different point of time in the future will come as the actual trajectory of the S&P 500 moves outside the rectangular red-zone that we've indicated on the chart. Given recent history and the Fed’s autopilot inclination to keep hiking interest rates well into 2019, even though the U.S. economy is expected to significantly slow (particularly in the third and fourth quarters), the most likely alternative focus point for investors will continue to be 2019-Q3.

Our thinking is that investors will be largely focused on 2019-Q1 during the next month because of the change in political control of the U.S. House of Representatives in early 2019 will keep investors concerned about what policies may come out of Washington D.C. during the first quarter. As we've seen in previous years, those potential policy changes can greatly influence how corporate boards set their dividend policies before the end of 2018, although we would expect this effect to be much less this year than in years where one political party has taken control of both houses of Congress and the White House.

Elsewhere, Barry Ritholtz celebrated the end of all the robocalls, emails, doorbell rings, and political advertising as a positive in this week's succinct summary of the week's major economy and market-related events. That’s a political motion we’re happy to second!