Political Calculations
Unexpectedly Intriguing!
02 May 2019
Dividends By The Numbers For April 2019

April 2019 was not a good month for investors looking for sources of dividend income, where the U.S. stock market saw both fewer increases and more decreases than what was recorded for the same month a year earlier.

The following chart shows the monthly increases and decreases for dividends reported by Standard and Poor for each month from January 2004 through April 2019. 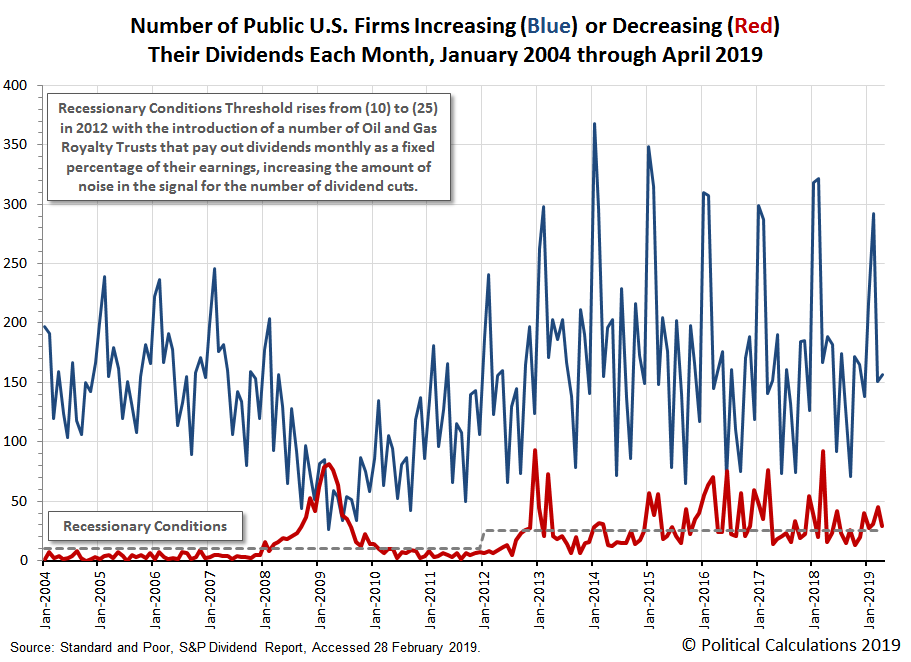 Let's run through the metadata for U.S. dividend payers in April 2019:

The total number of dividend cuts has continued to hold above the level that suggests recessionary conditions are present within the U.S. economy, so we've extracted a sampling of dividend cuts announced in real time during April 2019 which industries are experiencing some degree of distress. In the first part of this listing, we've listed the firms that set their dividend payments independently of their earnings and cash flow, whose corporate boards had to specifically act to either cut or suspend cash dividend payments to shareholders during April 2019.

In the second part of our listing of dividend-cutting firms in April 2019, we've focused on firms that pay variable dividends to their shareholders, often as a set percentage of their earnings, revenues, or cash flow. This group of firms includes a significant number of companies that pay dividends monthly, which makes them ideal for assessing recent business conditions in their respective industries.

For April 2019, we counted a total of 24 dividend cuts in our sampling, which is just five short of the total dividend cuts recorded by S&P for the month. Of these, 15 are firms that are involved in the oil and gas sector of the U.S. economy, while 6 do business in the financial sector, in which we group interest rate-sensitive Real Estate Investment Trusts. Two firms in the mining sector and one firm in the chemical industry round out the April 2019 sample.

The following chart compares the pace of dividend cuts in the current quarter of 2019-Q2 through the first month of the second quarter of 2018. 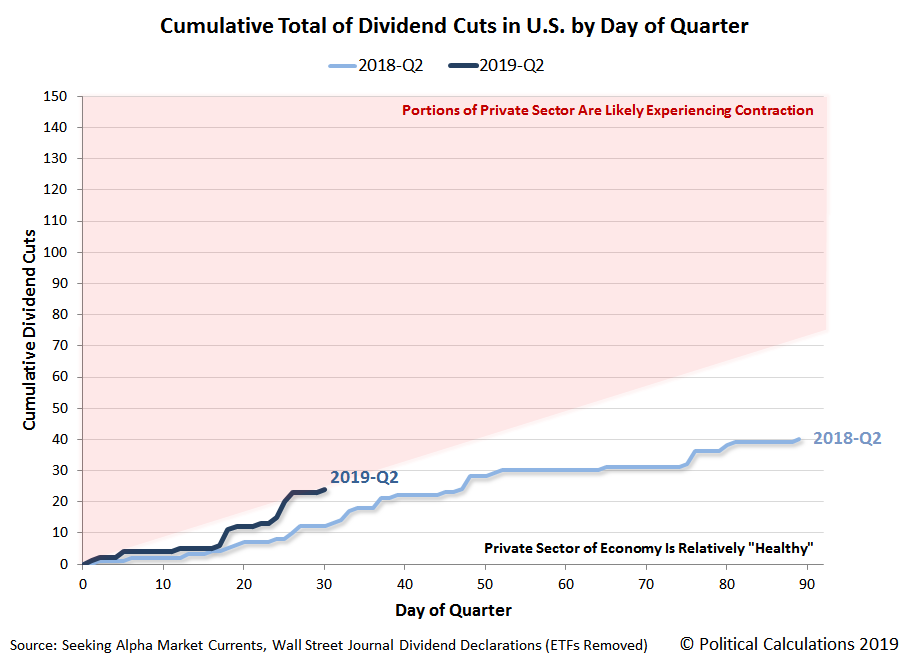 Compared with the same point of time in the year-ago quarter of 2018-Q2, the current quarter of 2019-Q2 is off to a rocky start, with the number of dividend cutting firms right on the edge of signaling some degree of contraction occurring within the distressed sectors of the U.S. economy.