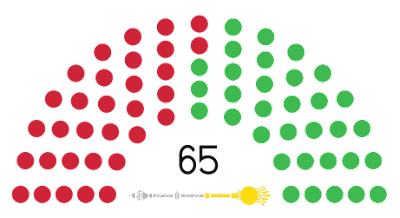 Majority rule is a long established system for making decisions in government, under which, the largest group in a particular place or area is given the power to make decisions for everyone.

In practice, the minimum threshold needed for decisions made the members of a group that has been empowered to become binding on the whole population under majority rule is 50 percent plus one.

That seems like a pretty straightforward way of determining the minimum number of people required within such an empowered group to establish the rules that will apply to everyone in society, but in the South American nation of Guyana, the math for determining the minimum threshold a majority in the nation's legislature needed to constitute a majority has become muddled thanks to some really questionable legal decisions. Dev Rawana, formerly an economics and statistics professor with the University of Guyana’s Institute of Development Studies, describes how simple majority math eluded a panel of judges and will soon come up again in a legal appeal, where settling that question will determine whether Guyana's parliamentary majority government stands or falls in a no-confidence vote:

This week, the Caribbean Court of Justice (CCJ) will hear oral arguments regarding whether 34 votes (as opposed to 33) constitutes a “majority” and is required for a successful passage of a No Confidence Motion brought in Guyana’s 65-membered Parliament, pursuant to Article 106 (6) of the Constitution of Guyana.

In March, Guyana’s Court of Appeal (the Court), in a 2 to 1 vote, controversially overturned a decision by the lower court, which previously held that the aforesaid motion filed by Guyana’s Leader of the Opposition, Dr. Bharrat Jagdeo, was successfully carried by a vote of 33 to 32, thereby warranting the Government’s resignation and new elections.

The Government moved to court arguing that 34 votes were needed. The Court agreed, but in doing so, it erred significantly because the Government’s argument is only applicable in legislative bodies with even-numbered membership. Secondly, the Court’s calculation defied two universally accepted methods used for calculation: the median formula and the PEMDAS method of operation.

Rawana explains how a majority of the judicial panel flunked their simple majority math test:

... in the Guyana case, the median was not applied. Instead, Chancellor Cummings-Edwards and Justice Gregory disaggregated the median formula into two overlapping stages to define the majority by taking one-half, rounded-up and then plus one to yield a majority of 34. This two-stage hybrid is mathematically and statistically flawed by international standards.

Why? In the first stage, the number is rounded-up, and again the rounded value is added to one to overstate the majority by one. Therefore, based on the median principles in determining the 50th percentile, 33 is the majority of 32 in the 65-Member Parliament; and, reflects the true effect of the constitution.

Rawana applies the PEMDAS method to explain how the Court should have correctly done the math:

... the Court erred in its calculation when it failed to comply with the median formula and the PEMDAS method of operation. The median formula is one half the sum of numbers plus one, or ½(n + 1). PEMDAS is a universally recognized acronym that tells us in what order we are to perform mathematical operations. It is as follows: parenthesis, exponents, multiplication, division, addition, and finally subtraction.

Here, had the Court complied with the median formula and the PEMDAS method, it would have addressed the items inside the parenthesis first; it would have taken 65 and add 1 to get 66, as its first step. Then as its second step, it would have divided this 66 (66/2) to get 33. Mathematically, 33 constitutes a “majority” in a 65-membered Parliament (as in Guyana).

Rawana continues to explain what the consequences of getting the majority rule math wrong would be....

Without the median formula and the PEMDAS order for calculation, the Court’s method of calculation only works for legislative bodies with even-numbered membership. To illustrate, imagine a parliament has 66 members. What is its majority? Using the Court’s formula of 1/2 n +1, we have half of 66 which is 33 in the first step. In the second step, we add 1 to 33 and that gives us 34. Thus, using the Court’s reasoning, a parliament with 65 members and a parliament with 66 members will have the identical majority of 34!

Clearly, this flawed method of calculation will introduce unprecedented confusion amongst educational, scientific, and legislative bodies across the entire Caribbean region, if not beyond. The effect is already being felt.

For example, retired Professor Emeritus Errol Miller (The University of the West Indies), a recognized expert in elections matters, admitted that should the CCJ uphold the Court’s decision, it will have serious implications for Trinidad and Tobago’s 41-member Parliament. To avoid chaos on such an extraordinary scale, it is important that the CCJ reject the flawed mathematical reasoning upheld by the Court of Appeal of Guyana.

It will be fun to find out if highly educated appellate judges can properly master PEMDAS!