Political Calculations
Unexpectedly Intriguing!
02 August 2019
What Are the Odds of That Happening in Your Lifetime? 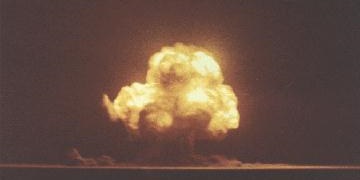 Here is how he arrived at those lifetime odds:

For a child born today (say 75 year life expectancy) these probabilities (.0117) suggest that the chance of a nuclear war in their lifetime is nearly 60%, (1-(1-.0117)^75). At an annualized probability of .009 which is the probability from accident analysis it’s approximately 50%.

That math formula provides the key to estimating the probability of any unique event occurring within any set period of time, which we've incorporated into the following tool. If you're accessing this article on a site that republishes our RSS news feed, please click through to our site to access a working version.

The default numbers in our tool are taken directly from Alex' example, where we find the probability of a nuclear war happening sometime in the next 75 years is 58.6%.

But the tool, and the math behind it, can be used to consider the odds of any unique event, where you're welcome to substitute numbers that apply for whatever scenario you would like to consider.

Let's consider a more fun scenario. In 2019, the St. Louis Blues hockey team went from being in dead last place in the league at the beginning of January to winning the Stanley Cup for the first time ever in its 52-year history six months later. The team won an 'ESPY' for "Best Comeback" in sports.

As unique events go, the Blues 2018-2019 season stands out as especially unique. Let's consider some odds:

What would the odds be of the Blues repeating their Stanley Cup-winning season during their next 52 seasons?

Averaging all these percentage probabilities together gives us an aggregate probability of 1.47%. Over the next 52 years, the tool suggests the Blues have a 53.7% probability of winning the cup a second time.

That's more likely than a nuclear war breaking out somewhere on Earth during the next 52 years, which would have nearly a 46% probability of occurring. Which outcome would you rather cheer for?