Political Calculations
Unexpectedly Intriguing!
October 3, 2019
Dividends By The Numbers For September 2019 and 2019-Q3

September 2019 was the worst month for dividend increases since September 2011. For dividend cuts, it was borderline bad, which is consistent with recessionary conditions being present within the U.S. economy. The overall picture these two bits of data create is of an economy that is slowing considerably.

The following chart shows the monthly data for dividend increases and decreases as reported by Standard & Poor from January 2004 through September 2019: 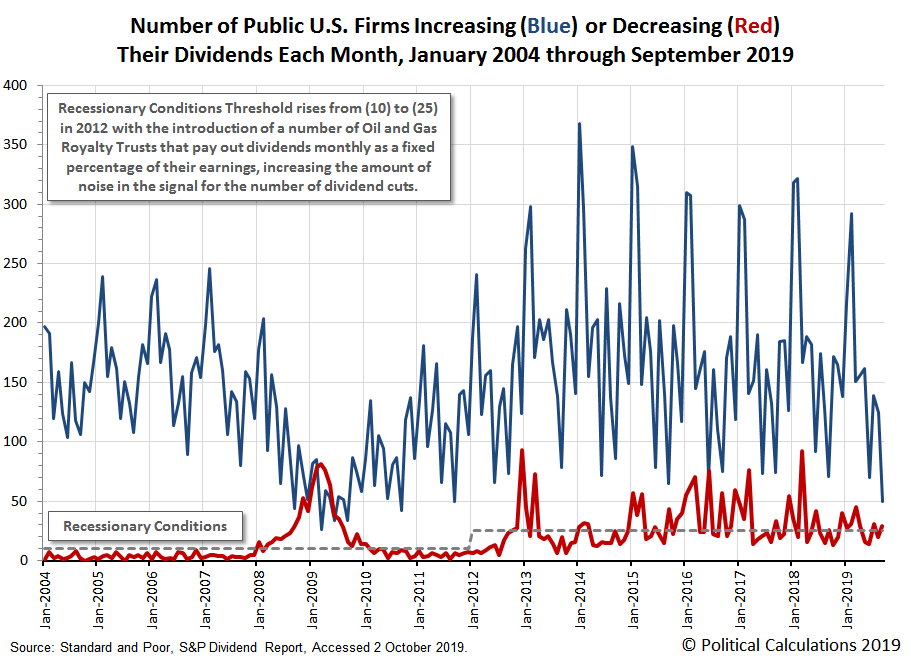 Here are the numbers for U.S. dividends during September 2019, with comparisons to August 2019 and to September 2018:

We've dug deeper into the data for the quarter's dividend cuts, mining our two near real-time sources for announcements of dividend reductions, Seeking Alpha and the Wall Street Journal. We've broken that list up into two parts: variable dividend payers and fixed dividend payers.

The following list of 17 U.S. firms that have cut dividends during 2019-Q3 includes only those that pay variable dividends from one period to the next, often as a straight percentage of their earnings. This category includes a number of firms that pay dividends monthly, where several of these firms may appear in the list more than once.

All but two of these firms hail from the oil and gas producing sector of the U.S. economy, which went through a rough patch with falling oil prices in recent months (late April to mid-June 2019), which will translate into dividend cuts for these firms in subsequent months. Oil prices have risen more recently thanks to geopolitical tensions, where we have observed the number of these firms announcing dividend cuts decline to relatively healthy levels in recent months, which we believe is why the overall number of dividend cuts in the market only appears borderline bad for September 2019. With oil prices having spiked and now falling, we would anticipate the number of dividend cuts in this sector to increase in upcoming months.

A bigger source of concern for investors are firms whose corporate boards set their cash dividend payouts to their shareholding owners independently of their revenues and earnings, where we have counted 16 in our 2019-Q3 sample, which we've listed below.

Twelve of these firms are in the financial sector, including Real Estate Investment Trusts (REITS), whose businesses have been negatively affected by the Federal Reserve's recent series of rate hikes, which it only just reversed at the end of July 2019. Of the five remaining firms, three are in the manufacturing sector, and there are one each from the insurance industry and the media sector. Given the severe downturn in the global automotive industry, we would anticipate higher numbers of dividend cuts in the manufacturing sector in months ahead.

Finally, sharp-eyed readers will note the total dividend cuts for our sample adds up to 33, while S&P's count of dividend cuts during 2019-Q3 only totals 29. This discrepancy reflects differences among our sources for how they count and report dividend cuts.