If the alternate method we developed for estimating median household income is correct, August 2019 will see the income earned by the typical American household during the month rise to be within several hundred dollars of $65,339. 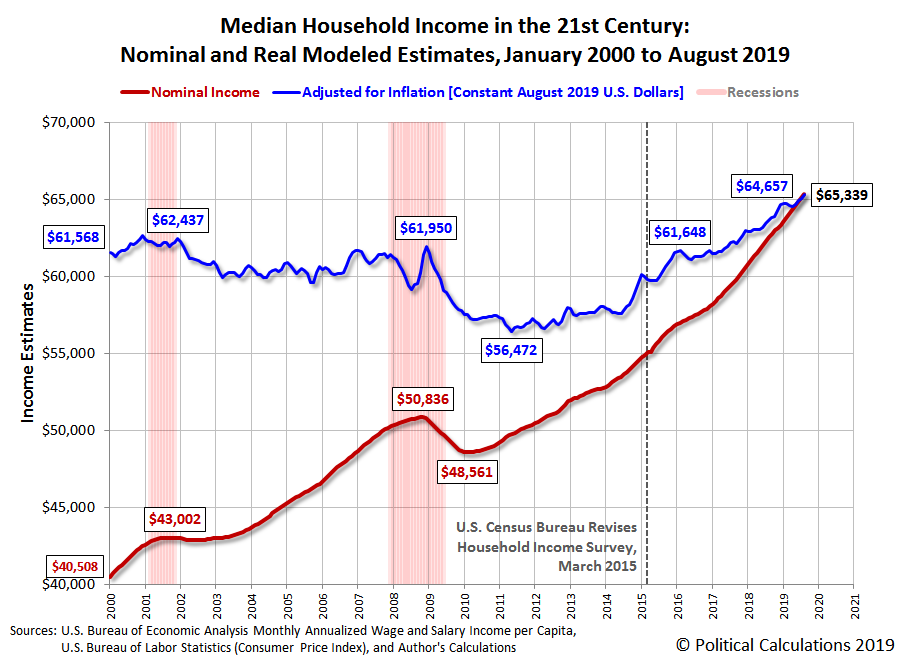 We'll find out in several days when Sentier Research publishes their estimate for the figure based on their analysis of the U.S. Census Bureau's monthly Current Population Surveys. They had previously indicated they would post their estimate of August 2019's median household income on Monday, 30 September 2019, but that appears to have slipped to Friday, 3 October 2019.

After Sentier has reported their estimate, we'll update this post with a chart showing their estimates of median household income in the 21st century. Check back next week to see how we did with our alternate method!

Our alternate methodology for estimating median household income from data reported by the U.S. Bureau of Economic Analysis put the figure at $65,020 for July 2019, which was within 0.1% of Sentier Research's estimate of $65,084 for the month. It's rare our estimate gets so close to Sentier's estimate, which is the target we aim to hit with our alternate method, where July 2019 proved to be a remarkably good month.

We originally developed our alternate method to fill the gap for estimating the level of median household income on a monthly basis that was left when Sentier Research had suspended reporting their estimates from June 2017 through February 2018. We consider it to be a companion bit of analysis to go along with Sentier's estimate, much like how labor market observers use ADP's payroll numbers to complement their analysis of the employment numbers published by the Bureau of Labor Statistics.