California, Florida, Texas, New York, and New Jersey are the five biggest markets for residential real estate in the United States as measured by the aggregate value of existing home sales. The following chart presents the trends for existing home sales in each of these states from January 2016 through July 2019, which is based on seasonally-adjusted sales and price data published by real estate sales and analytics firm Zillow Group (NYSE: Z). 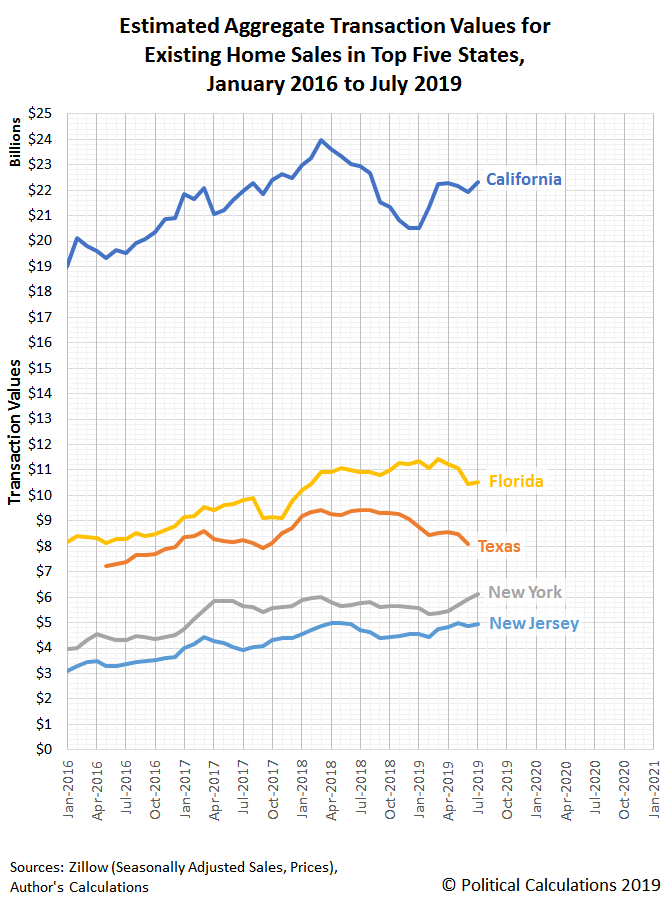 Data for Texas was not available in Zillow's latest monthly report, so we've opted to show data for the state from Zillow's previous month's report, which covers the period through June 2019. All data for recent months is subject to revision as states update their records to reflect new transactions, while Zillow's historic data is continually revised to reflect updated seasonal factor adjustments.

With that noted, existing home sales in California have rebounded since bottoming in December 2018 and January 2019, coinciding with falling mortgage rates that have stimulated sales in the state's very high priced local markets. The state however is still far below its March 2018 peak.

Sales in Florida appear to have dipped in recent months, breaking what had been a slow and steady uptrend since March 2018. Texas meanwhile shows some of the lagging effect of a downturn in oil and gas prices in the petroleum-rich state, where existing home sales have slowed since October 2018.

Sales to foreign buyers, and particularly buyers from China, in California, Texas, and Florida have been reported to be down sharply since March 2018, which is Month 0 for the U.S.-China tariff war. Prior to March 2018, Chinese residential investment accounted for 34% of real estate transactions in California, which has since diminished.

Both New York and New Jersey have followed similar trends over time, with the aggregate value of existing home sales in the neighboring states having trended up to the highest or near-highest levels recorded in Zillow's database for both states since February 2019.