Nearly at the midpoint of the quarter, Political Calculations' near real-time sampling of dividend declarations from data published by Seeking Alpha and the Wall Street Journal indicates that 2019-Q4 is looking very much like 2018-Q4, just under in the count of dividend cuts announced in the quarter to date at this point. 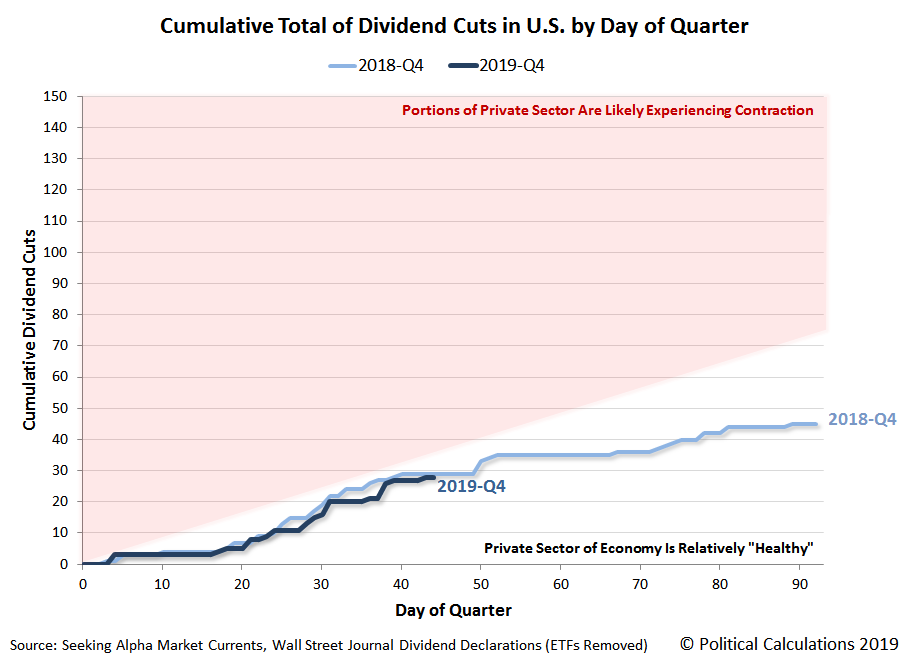 Breaking the dividend cut data down by type of payer, we find 18 firms that pay variable dividends make the list, predominantly from the oil and gas sector of the economy.

Overall, fourteen of these firms are in the oil and gas sector, while the remaining four represent the mining, chemical, finance, and manufacturing industries.

Unlike the variable dividend payers, there are only two firms from the oil and gas sector. The financial sector, in which we include real estate industry-related firms, accounts for four of this category of dividend payers, while the services, consumer goods, mining, and media industries each have one representative.

All in all, we find the total number of dividend cuts so far in 2019-Q4 indicates the overall U.S. economy is relatively healthy, although the oil and gas industry and the manufacturing industries bear watching, the latter due primarily to the sustained global downturn in the automotive industry, and also the prolonged period for which Boeing has been unable to deliver its 737 MAX aircraft to its airline customers.