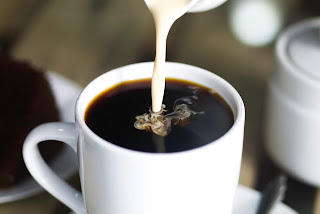 Have you ever watched what happens in your cup of coffee after pouring milk or cream into it?

If you're weren't fully alert when you did that this morning, what happens as the cream disperses into the coffee is that it forms vortices that swirl about as soon as the two fluids start to mix together, where streaks of unmixed coffee and cream form complex and turbulent patterns in the cup until the two liquids have fully mixed. If you were to use a microscope to focus on the cream and coffee before they have blended together, you would see similar swirling patterns at any scale you might choose to zoom your focus.

That indifference to scale is what Batchelor's Law for turbulence is all about. It was conjectured in 1959 by mathematician and fluid dynamicist George Batchelor, who observed it experimentally and proposed it would apply to all fluids undergoing certain turbulent flow conditions.

If our coffee example doesn't work for you, here's a very short video from Marie-Caroline Jullien's PhD research into fluid dispersion to help better visualize the phenomenon in action:

Bedrossian, Blumenthal and Punshon-Smith adopted an approach that considers the average behavior of fluids across all turbulent systems. Mathematicians had attempted this strategy before, but no one managed to implement it successfully.

The approach works because randomness sometimes makes it easier to make accurate predictions about the behavior of a system. Imagine a pegboard, like in a game show or arcade. Drop a coin from the top, and it will ricochet from peg to peg until it settles in one of many slots at the bottom. It's difficult to predict exactly where a single coin will land — there are just too many factors influencing which way the coin will bounce at each peg.

Instead, you can treat the system as random — acknowledging that at each peg, there's a chance the coin will bounce to the left and a chance it will bounce to the right. Get the probabilities right, and you can make accurate predictions about the behavior of the system as a whole. For example, you might find that coins are much more likely to land in certain slots than others.

"The nice thing about randomness is that you can do things like averaging," Thiffeault said. "Averaging is a very robust idea in the sense that it doesn't care about many of the details."

So what does this mean for turbulence and mixing paint? Because exact, deterministic statements are beyond the reach of mathematics, it's more useful to imagine that the forces acting on the paint occur at random — sometimes stirring it this way, sometimes stirring it that way, with no underlying pattern to the stirring. This is known as the random, or stochastic, approach. It allows mathematicians to adopt a high-level statistical view and to examine what happens in these types of systems in general, without getting bogged down in the specifics of every detail.

"A little randomness allows you to smear out the difficulties," Punshon-Smith said.

And that's what finally allowed the three mathematicians to prove Batchelor's law....

The proof is one of the strongest mathematically rigorous statements ever made about turbulent systems. Perhaps even more importantly, it opens the way for a new flow of mathematical insights. Turbulence is a chaotic phenomenon, nearly random in its motion. The three mathematicians figured out how to fight randomness with randomness. Others in the field will almost certainly follow their lead.

It's a big accomplishment, one that has immediate applications for any field that involves mixing fluids, such as chemistry, climate and weather modeling, fluid dynamics and more, where a number of processes that previously had to be proven by expensive testing can now be validated by analysis. That practical angle is why we anticipate that Bedrossian, Blumenthal, and Punshon-Smith's accomplishment will be among the contenders for the biggest math story of the year.