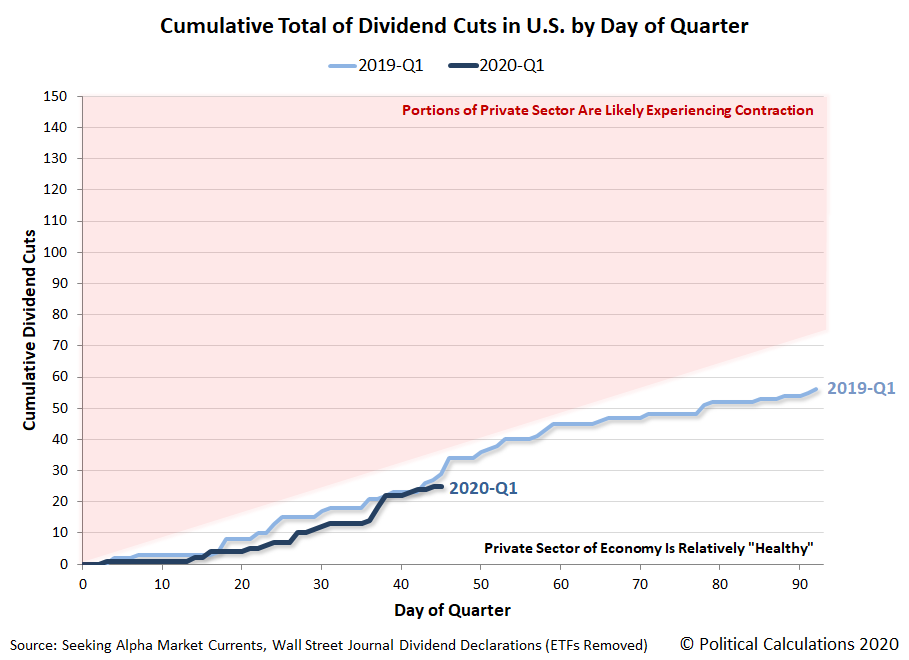 Through 14 February 2020, we've counted a total of 24 dividend cuts announced through our two near-real time sources of dividend declarations, Seeking Alpha and the Wall Street Journal. We've broken that full list up into two different categories, one for firms that pay variable dividends to their shareholders, with the amount of the dividends directly linked to their revenues and earnings, and the other for firms that fix the amount of their dividend payments independently of their business performance.

Here's the first part of the list of dividend cuts announced by the variable dividend paying firms through the halfway point of 2020-Q1.

Eight of these firms hail from the oil and gas industry, where the number of firms is consistent with the typical month-to-month noise we see among variable dividend payers, which is often tied to the fluctuating prices of oil and gas. Of the remaining firms, two are in the mining industry, one is a technology firm, and one is in the financial industry.

Here's the list for the firms that set their dividends independently of their earnings and cash flow:

Seven of these firms are in the U.S. oil and gas industry, but this list is significant in that several are midstream producers, whose businesses involve transporting oil and gas from wells (upstream) to end users (downstream), usually through pipelines, where the firms are cutting their dividends to address high debt loads on their books, which is an indication they are not seeing the revenues they had hoped to gain by investing in their infrastructure.

Beyond that total, we count two firms in the manufacturing sector of the U.S. economy, two are real estate investment trust, and there is one firm each from the mining and technology sectors.

Of these, the two manufacturing firms U.S. Steel (NYSE: X) and Spirit AeroSystems (NYSE: SPR) because we're starting to see some of the anticipated fallout from the global recession in the automotive industry, where we would advise paying close attention to debt-burdened firms like Ford (NYSE: F), and also to firms affected by Boeing's ongoing problems in the aerospace industry, which is now rippling through the company's supply chain, and which may take years to recover, even if Boeing (NYSE: BA) soon receives FAA approval to resume production of its troubled 737 MAX commercial transport aircraft.