If you've paid attention to viral Internet trends, you've probably heard of the Trillion Trees project, which aims to plant or sustain one trillion trees by 2050 to absorb a quarter of man-made carbon dioxide emissions from the Earth's atmosphere.

Will that work as intended? Not according to the carbon dioxide measurement experts at CO2Meter, a firm that specializes in producing carbon dioxide gas detection and monitoring technologies, who ran the numbers:

Could enough trees be planted to impact CO2?

One ton of CO2 is a lot. However, on average human activity puts about 40 billion tons of CO2 into the air each year. This means we'd theoretically have to plant 40 billion trees every year, then wait for decades to see any positive effect. By the time 40 years had passed, the trees we had originally planted would only cancel out the increased CO2 levels today.

In addition, to combat the additional rise, we'd have to continue to plant more trees each year. Not all land can support trees. Eventually, we'd simply run out of land.

Could we plant that many trees?

In July of 2016, 800,000 volunteers in India planted 50 million tree saplings in an effort to re-green the country. While there are many good reasons to combat deforestation, this project would have to be replicated 800 times to cancel out the CO2 created by humans.

There are many other reasons to support tree planting projects, such as providing habitat for wildlife and protecting biodiversity, as well as supporting the economies of local communities by developing their timber-related resources, but even the Trillion Trees project's organizers realize they are unlikely to achieve a goal of planting that many net new trees, which is why state up front that their vision would see "one trillion trees re-grown, saved from loss and better protected around the world by 2050".

That's a far cry from actually planting one trillion net new trees. Which brings us to our featured invention today: mechanical trees. Here's how the innovation was introduced in the American Society of Mechanical Engineer's magazine back in 2018:

Inside a rectangular Plexiglas tower in a lab on the campus of Arizona State University in Tempe sit the parts for an artificial tree. Not leaves and branches, but a yellowish corrugated filter silently pulling carbon dioxide out of the air. The carbon dioxide doesn’t get turned into fruit or roots or tree trunks, as it does with a natural tree, but it simply gets collected by resin in a reversible chemical process.

Joyce Kilmer might not have approved, but what the artificial tree lacks in poetry, it makes up for in efficiency. According to Klaus Lackner, founder and director of the Center for Negative Carbon Emissions at Arizona State, the artificial tree - right now, a process more than a product - can extract carbon dioxide 1,000 times faster than a natural tree.

Lackner's team is methodically transforming the process into a machine.

One machine won't be enough. Considering the 36 gigatons emitted by human activities every year, it will take another and another and maybe 100 million units, each the size of a shipping container, each extracting a ton of carbon dioxide from the air, each day. At that scale, a forest of artificial trees could potentially keep up with the current rate of carbon emission.

A standard ISO shipping container is 8 feet wide, 8-1/2 feet tall, and typically either 20 or 40 feet long. If you stood one of these containers up on end, you basically have an object that would fit well within the physical space of a mature tree. Now, imagine 100 million of these units doing the job of removing 1,000 times as much carbon dioxide out of the atmosphere as the typical tree. Better still, consider that these units can be placed in places where trees cannot grow.

How do ASU's mechanical trees work? The 2018 ASME article indicates the direction that the innovation was heading:

A more recent design involves disks of sorbent loosely stacked into cylinders to allow air to flow over each surface. At regular intervals—roughly every 1,000 seconds—the stack collapses into a canister that then seals itself up and sprays water over the disks, releasing the absorbed gas. Lackner's team envisions a cluster of 16 of these stacks, with one collapsing and one springing up each minute.

To collect the CO2 from the stacks that are outgassing, a vacuum would be pulled continuously, using a clever ejector system, based on the Bernoulli effect, through a system of valves that switch its input to whatever cylinder is being harvested at the moment. The concept is similar to the system used in steam railroads to draw cold water into pressurized boilers. The flow is directed such that the output of the most depleted cylinder is fed into its neighbor that immediately preceded it in the sequence, which in turn feeds into the one that preceded it. The net effect is that the last cylinder to close is "topped off" at which point its CO2 is harvested.

One of the ASU researchers working on the project described the sorbent material as consisting of "anionic exchange resins, where the resin will bind CO2 as a bicarbonate ion when in a dry state. When wet, a carbonate ion forms, replacing two bicarbonate ions resulting in the release of a single molecule of CO2."

It sounds much like a zeolite-type mineral, which have promising capabilities for application in industrial chemical processing, which carbon dioxide extraction from the air would certainly qualify as.

Nearly two years later, Lackner's mechanical tree carbon dioxide removal concept has been developed to the point where it will soon be put to test in the real world, having gained significant financial backing:

A Dublin-based company, Silicon Kingdom Holdings (SKH) has announced its intent to begin planting "mechanical trees" in the US. The "trees", developed by researchers at Arizona State University (ASU), will suck CO2 from the air and allow it to be stored or sold and re-used in a variety of applications including enhanced oil recovery, synthetic fuels or in agriculture or food and drink industries.

SKH intends to build 1,200 metal carbon-cleansing columns, or "trees" within the next year. It is claimed that the technology is several thousand times more efficient at removing the gas from the air than actual trees. What separates the SKH tech from other carbon capture technologies is that it is not necessary to draw air through the system mechanically, allowing the wind to blow air through the system instead. The system makes the technology passive, relatively inexpensive and commercially viable.

If the technology is deployed at scale, it could help to combat global warming through aiding a significant reduction in CO2 levels. Full-scale CO2 farms using the mechanical trees will be capable of removing up to 3.8 million metric tonnes of carbon dioxide annually, according to the researchers.

Given these numbers, one mechanical tree column has the equivalent CO₂-extraction capability of 1,396 trees, where one cluster of 12 columns could remove 365 metric tons of carbon dioxide from the air per year. The pilot farm that SKH plans to construct of 100 clusters of 12 columns each would have the equivalent CO₂-removal potential of 1,949,165 trees.

Since the ASME invoked Joyce Kilmer, maybe it's time to rework the first two lines of his most famous poem given the potential of mechanical trees for scrubbing man-made carbon dioxide out of the air:

I THINK that I shall never see
Anything so carbon negative as a mechanical tree.

The IIE team will leave finishing the revised poem to better poets. We'll close this edition with an image of Populis Freemontii, a 24-foot tall steel tree art installation in a Tempe, Arizona park near the ASU campus, to consider what the future might hold for mechanical trees. 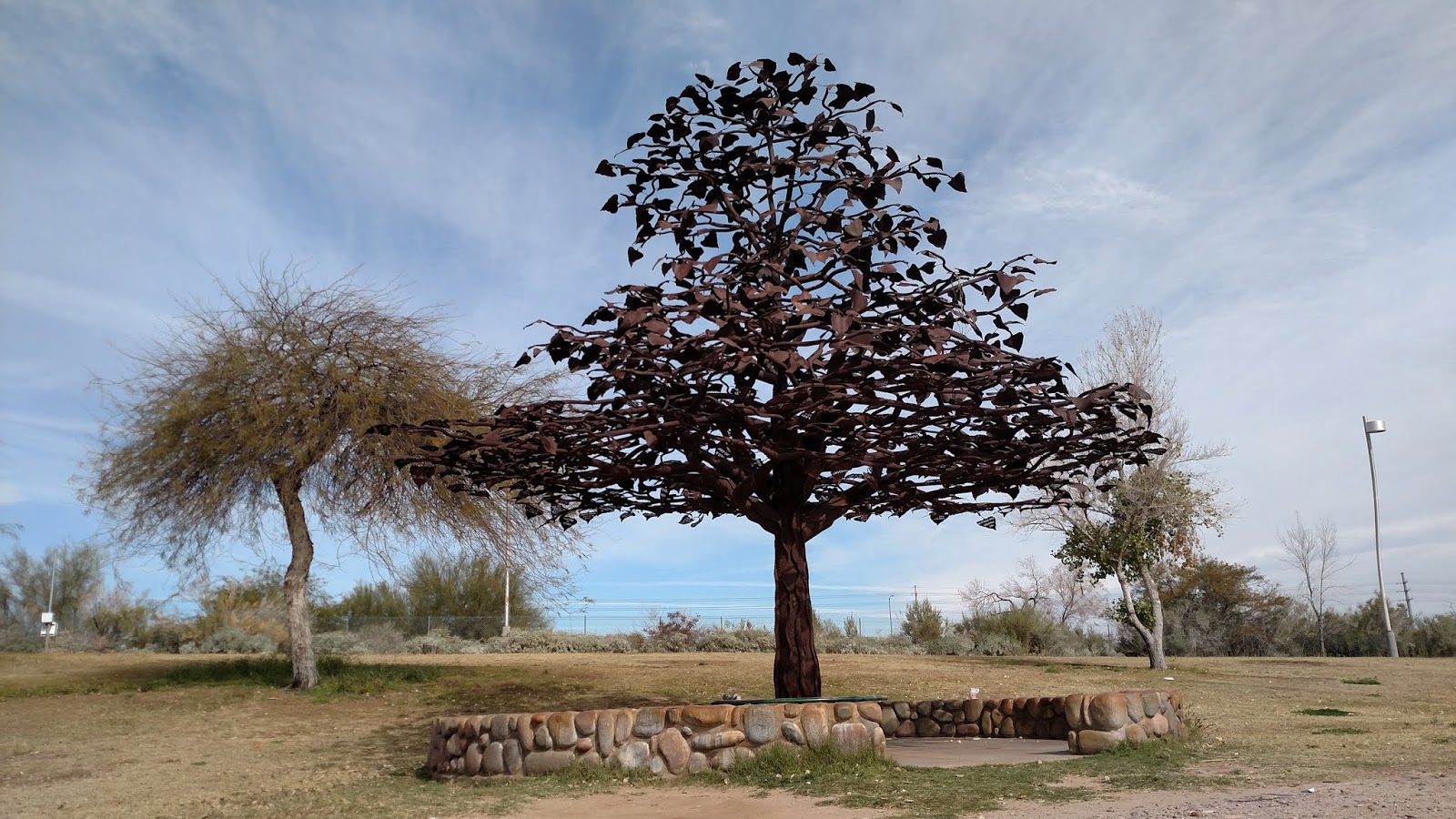