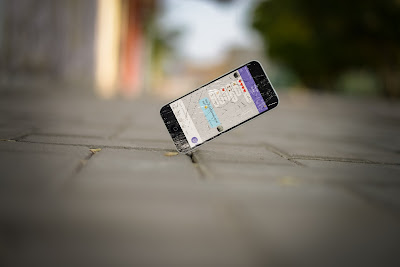 If you rely on your smart phone for, well, everything, you are probably already familiar with that feeling of panic when the device slipped out of your fingers and plummeted to the pavement.

People have a real aversion to losing things. In the case of today's modern mobile devices, that fear goes by the joking name "nomophobia", which has created opportunities for inventors with ideas for how such a loss might be prevented if they are ever dropped.

One of those ideas is to equip the device with airbag-like technology that would deploy if the accelerometers that are commonly equipped in today's mobile devices detect a sudden uncontrolled acceleration. The following illustration appears in U.S. Patent 3,330,305, where the named inventors, Gregory M. Hart and Jeffrey P. Bezos, both of an online shopping service called Amazon.com, described how to use "propulsion elements" (numbered 302 in the figure) to slow the device (numbered 300) with bursts of compressed gas as it travels toward an impact surface (numbered 304), where it might be cushioned from deploying miniature airbags (not shown). 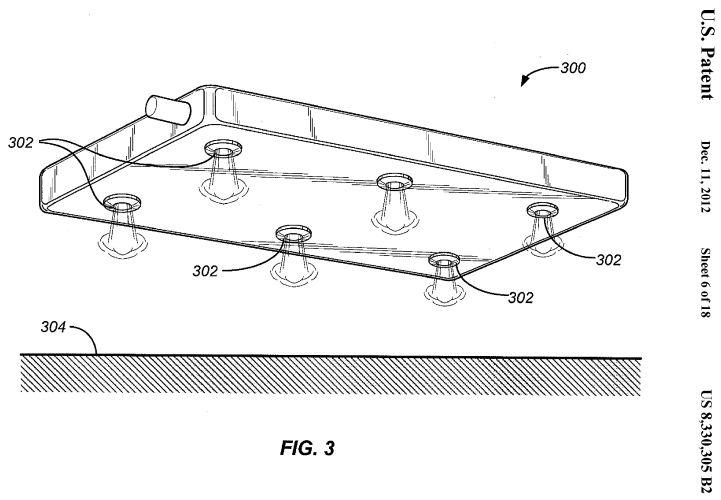 Alas, it is not yet possible to buy such a device from Amazon. And to be sure, news of the patent was greeted with a mix of optimism and skepticism when it was issued in 2012:

Oxford University science lecturer Victor Seidel said: "An airbag might mean the end of cumbersome cases, but it might be impractical to produce. But we are often surprised by what ideas become successful."

"The handset would have to be bulky to hide an airbag. What's next, smartphones with built-in parachutes? Or maybe handsets with wings and propellers?"

Flashing forward six years, German engineering student Philip Frenzel developed and patented a different kind of device to protect a mobile phone from damage if its dropped, winning an award from the German Society for Mechatronics. Frenzel's invention deploys spring-loaded retractable legs from a case to actively dampen and absorb the force from impact, protecting the dropped device from damage, as shown in the following video:

Alas, while the ADcase was marketed on Kickstarter in 2019, it did not receive enough interest to proceed forward to become a product you can buy.

The conclusion we can draw from neither Amazon nor ADcase's protective inventions reaching the market is that mobile device owners aren't perhaps as frightened by the prospect of potential damage to or loss of their devices if dropped as the inventors might have believed.

But that doesn't mean these patented inventions are done for. It may just be a matter of identifying a more specialized application where the potential cost of losing a device would be much more costly than a smart phone. Perhaps such as landing probes on the surface of planets or asteroids, where the inventions might be as effective and much less costly than what NASA developed to land the Spirit and Opportunity rovers on the surface of Mars in 2004.

The Spirit and Opportunity Mars rovers cost $800 million each. It would seem that somewhere between the $800 for a smart phone and $800 million for a Mars rover is the magic price point for these inventions.