Over three and a half thousand years ago, the island of Crete in the Mediterranean Sea was a home to the Minoan civilization. Archaeological evidence that has survived to the present day suggests the Minoans were one of the earliest civilizations to develop a coherent system of writing, the earliest versions of which have yet to be deciphered, but whose later versions have been successfully translated because more artifacts of it have survived and because those later versions were precursors to ancient Greek. 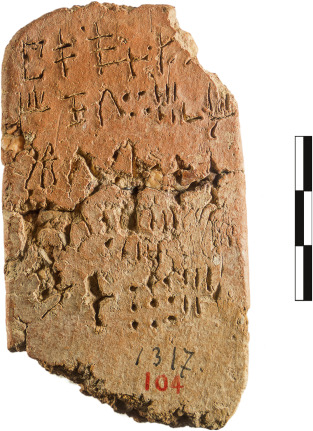 The earliest version of the written Minoan language is called Linear A, which exists today in the form of symbols recorded on broken clay tablets and other artifacts that were mostly used in trade. Most of Linear A remains undeciphered, but what has been able to be translated indicates it was used for the very mundane purpose of keeping track of traded goods.

There are a few reasons why Linear A is difficult to decipher. Mostly, there are no long text strings, in fact, the documents are primarily lists, with headings followed by a logogram, followed by a number and/or fraction. Classicist John Younger thinks the headers represent a type of transaction, while the entries in the lists are commodities and their descriptions (e.g., fresh/dried, or subset types), and a monetary amount follows that. The purposes of these lists are likely inventories, assessments, collections or contributions, or allocations or disbursements.

Although they've known that these artifacts present both numbers and fractions for decades, archaeolinguists haven't made much progress over the last several decades in translating more than the Linear A symbols representing whole numbers. Until this year, when a team of University of Bologna researchers developed a novel approach for attacking the script:

The members of the European Research Council project INSCRIBE (Invention of Scripts and their Beginnings), Michele Corazza, Barbara Montecchi, Miguel Valério, and Fabio Tamburini, led by Dr. Ferrara, applied a method that combines the analysis of the sign shapes and their use in the inscriptions together with statistical, computational and typological strategies to assign mathematical values to the Linear A signs for fractions.

The team first studied the rules that the signs followed on the clay tablets and other accounting documents. Two problems had so far complicated the decipherment of Linear A fractions. First, all documents containing sums of fractional values with a registered total were damaged or difficult to interpret, and second, they contradicted uses of certain signs, which suggest the system changed over time. Thus, the starting premise had to rely on documents concentrated to a specific period (ca. 1600-1450 BCE), when the numerical system was in coherent use across Crete.

To investigate the possible values of each fractional sign, the team excluded impossible outcomes with the aid of computational methods. Then all possible solutions—almost four million—were whittled down also comparing fractions that are common in the history of the world (e.g., typological data) and using statistical tests. Finally, the team applied other strategies that considered the completeness and coherence of the fractions as a system and in this way the best values were identified, with the least redundancies. The result, in this case, was a system whose lowest fraction is 1/60 and which shows the ability to represent most values of the type n/60.

Not bad work for decoding part of a language that had largely disappeared from the world by 1450 BCE.

More than that, their work also helps explain how the later Linear B version of the Minoan language absorbed and preserved a portion of Linear A's system for representing fractions.

... some Linear B signs for weights and measures may have been adapted from the Linear A fraction signs, and even though the two systems registered quantities differently, the Linear B system took inspiration from Linear A (cf. already Younger, 2005). It is not hard to imagine how the adaptation may have taken place. Measures were implicit in Linear A commodity logograms, and some of them were ligatured with fractional signs (Section 1): for example, GRA + F most probably meant roughly ‘one-eighth of the grain measure’. Some fractional signs in time were reinterpreted to note a certain part of a measure. The frequent use of K L2 as a measure for cereal (GRA) gives some support to the notion that the sign shapes of K and L(n) became associated with dry capacity measures, and the creators of Linear B may have reused them as such. Thus, it is striking to see a notable historical continuum with the redeployment of Minoan fractions in the Mycenaean measuring system.

There is also a lesson for today's math students to be taken away from the deciphering of Linear A's system for representing fractions. Even though Linear A disappeared from the world over three and half thousand years ago, the people using that early written language were clearly dealing with real world math problems involving fractions because they needed to get their sums correct. Some things never change in history.