Going by the number of dividend cuts announced during the month, the U.S. stock market continued to show signs of a robust recovery in March 2021.

But there's more to assessing the market than just counting up the number of dividend cuts. Let's run through the U.S. stock market's dividend metadata to get a more complete picture.

Most of these numbers indicate the continuation of a strong recovery. Only the number of dividend declarations suggests the U.S. stock market remains relatively subdued below pre-coronavirus recession levels.

The following chart shows the number of dividend increases and decreases announced each month from January 2004 through March 2021. 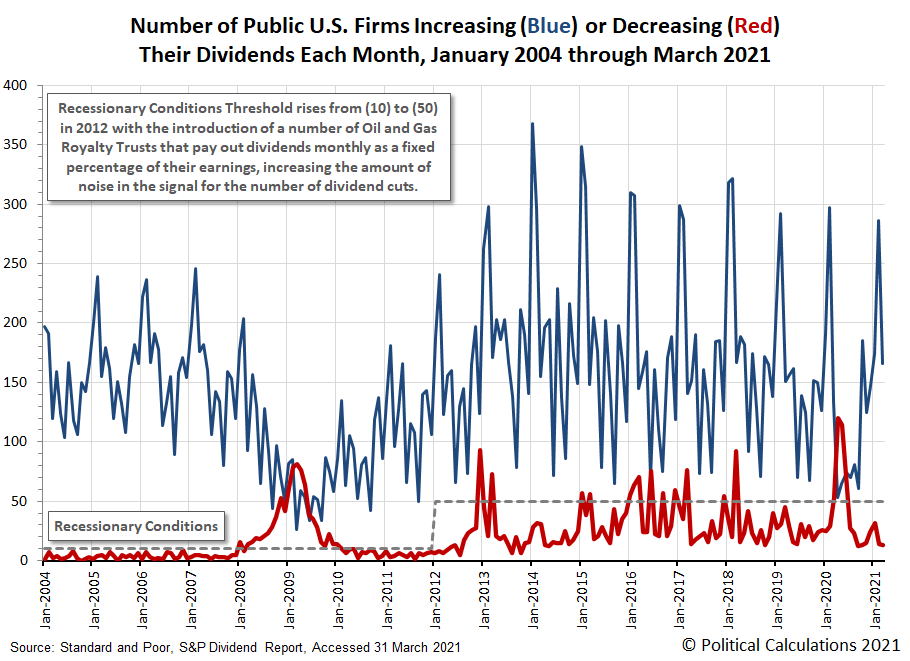 The next chart compares the cumulative number of dividend cuts and suspensions recorded throughout each day of 2021-Q1 against the three previous first quarters: 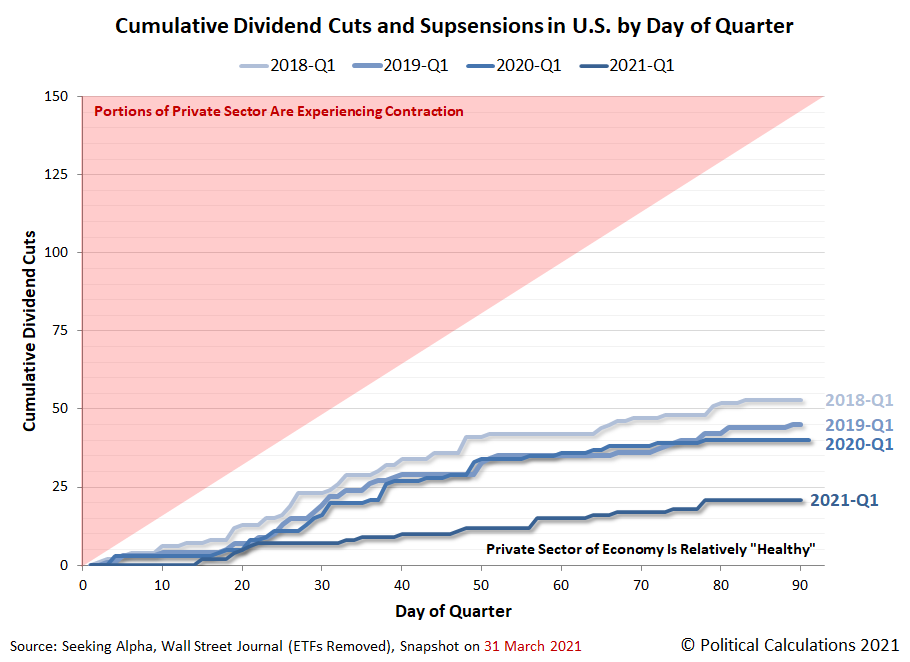 This chart reflects the aftermath of the coronavirus recession on the U.S. stock market. 2020 saw the number of dividend cuts and omissions soar in response to the pandemic and the combination of state and local government lockdowns that crippled much of the economy. Now, with Operation Warp Speed's vaccines and the lifting of government-imposed restrictions on businesses in much of the U.S., few U.S. firms have needed to announce dividend cuts.

That doesn't mean the economy was entirely free from distress during the quarter. Here's the very short list of dividend cuts we saw in our near real-time sampling for March 2021.

Each of these firms can trace the current distress behind their announced dividend cuts to some aspect of the coronavirus recession. While the first three represent something of a delayed response to 2020's coronavirus recession, the second three are in response to the new lockdowns being imposed by national governments in the Eurozone in 2021. That's because as variable dividend payers, the dividends of oil royalty trusts like these firms are very sensitive to changes in global oil prices. Here, the reduction in demand resulting from Eurozone lockdown measures means falling oil prices, which in turn, has meant dividend cuts for these firms.

Variable dividend payers can be like the proverbial canaries in the coal mine, which is why we pay attention to them. Sometimes, they just contribute noise. But other times, as now, they pick up on an underlying signals which makes them well worth watching.