Political Calculations
Unexpectedly Intriguing!
01 April 2021
Inventions in Everything: The Hoverbrella

Imagine this scenario. It's raining, so you need to carry an umbrella to keep while out in the weather. Unfortunately, holding the umbrella requires the dedicated use of one of your hands, which means keeping dry comes at a great cost: you have to give up whatever else it is you could be doing with your umbrella-holding hand.

Fortunately, there's a special technology for solving this problem: the Hoverbrella. This concept comes by way of Matt Bennedetto, who had the inspiration to combine traditional umbrella technology with today's drone technology to produce a hands-free solution for keeping dry while on the move in the rain! The following animated image illustrates how the invention can free up your hands to do the other tasks you would rather be doing with them while out in the rain.

Although Benedetto has done the most to make the concept behind a flying drone-supported umbrella visible, the invention of an automated hands-free umbrella belongs to Raynel Lazo-Antunez and Bertha Rocio Andrade-Madrinan of Miami, Florida, to whom U.S. Patent 9,603,422 was issued on 28 March 2017. Their patented concept differs considerably from Benedetto's version, in that it's the spiritual descendent of blimp technology. Here's an illustration from their patent: 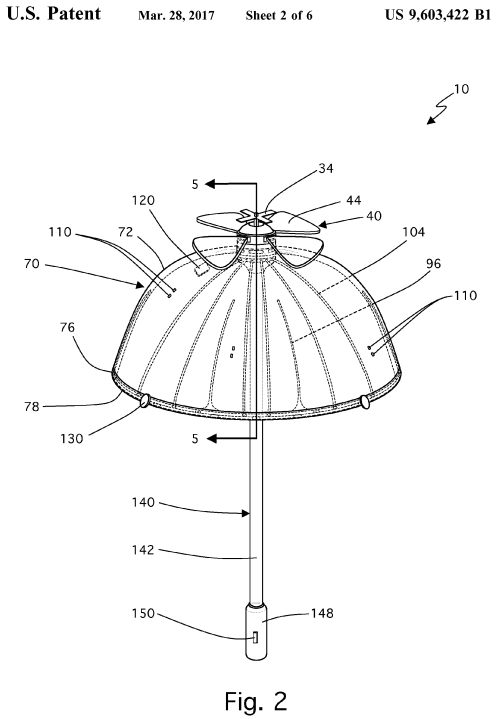 Here's the description of the invention from the patent's abstract:

An automated hands-free umbrella, having a controller unit integration module with a motor assembly. The motor assembly has a shaft and a directional propeller. A power module has a housing. The housing has a gas container module. The gas container module has a container having gas. Further having an umbrella canopy module, a handle assembly, and a data coordinator system module. The automated hands-free umbrella sustains itself in the air by controlling the umbrella's buoyancy or floatability with an incorporated gas, such as helium. Also has means to hover over a user, even as the user is stationary or while moving.

Lazo-Antunez' and Andrade's patent is assigned to Droidbrella Technologies of North Miama, Florida. The following video introduces their now-patented technology:

The Inventions in Everything team appreciates that our publication date may raise questions of whether any of these innovations and inventions are real. Rest assured that we cannot make any of this up, nor could we make up any of the following inventions from our archives!

From Inventions in Everything's Archives: