There's not much new in the S&P 500 (Index: SPX) this week, so it looks like the index kept drifting upward to new highs on its momentum.

Here's how that looks on the latest update to the alternative futures chart: 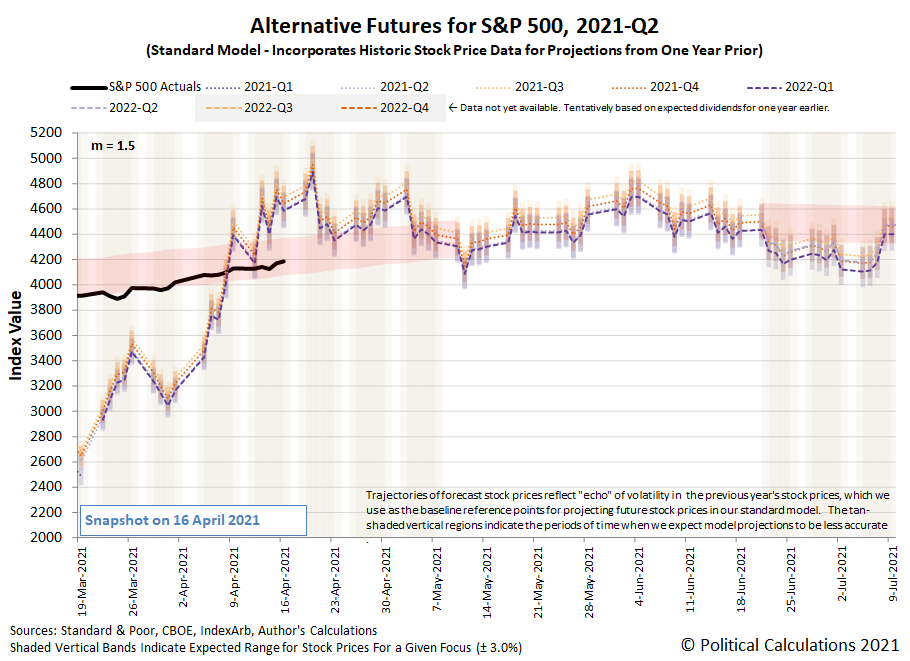 We're also reaching the point where we can test one of the assumptions behind the redzone forecast shown on the chart. When we first locked it in several weeks ago, we assumed investors would begin shifting their forward-looking focus from 2021-Q2 out to the more distant future of 2021-Q4 during April 2021.

That assumption is looking really iffy right now. Instead of starting to shift their forward time horizon to the more distant future as we has assumed would happen this month, investors would appear to have strongly locked into their focus on 2021-Q2.

Given the small differences in the expectations for the growth rate of dividends in 2021-Q2 and 2020-Q4, we see that the redzone forecast range has so far captured most of the trajectory for the S&P 500. But that trajectory has also progressively run to the low side of the projected range. The actual trajectory is much more consistent with what would be expected if investors were maintaining a strong focus on 2021-Q2, so the question becomes why?

We think the ongoing strong focus on 2021-Q2 may be related to the surge of inflation now hitting the U.S. economy, which is raising questions of how long it will be before the Fed has to react to it. That concern is pulling investors forward-looking attention in toward the near term.

The growing concern of rising inflation and the Fed's likely response to it is reflected in the week's market-moving news headlines, where the first step in that response looks like it will involve tapering the Fed's purchases of U.S. government-issued bonds.

Meanwhile, the debonair Barry Ritholtz listed seven positives and five negatives he found in the past week's markets and economics news.

On a final note, while investors may now be focusing on 2021-Q2, they can only do so until the quarter runs out. No matter what, investors will have to shift their forward-looking focus to some other point of time in the future and that will have to happen sometime before the third Friday of June 2021 when the dividend futures contracts for 2021-Q2 expire. Since the differences in the changes expected for the year over year growth rate of the index' dividends per share are relatively small, it's unlikely we'll see a large scale Lévy flight event when that happens.

Unless, of course, something else changes to affect the expectations for the future or the Fed's willingness to stay on its current policy path.