Political Calculations
Unexpectedly Intriguing!
03 May 2021
The S&P 500 Sets a New Kind of Record

Usually when we wrap up a trading week for the S&P 500 (Index: SPX), we focus on the big picture for the index.

For instance, did the index set any new highs? The answer to that question is yes, twice in the past week, as the S&P 500 reached 4,187.62 on Monday, 26 April 2021 and then reached higher to 4,211.47 on Thursday, 29 April 2021, before dropping back to close the week of trading at 4,181.21. On the alternative futures spaghetti forecast chart, we see the trajectory of the index is running at the lower edge of the redzone forecast range we have technically been projecting since 11 January 2021, but which we locked in on 22 February 2021. 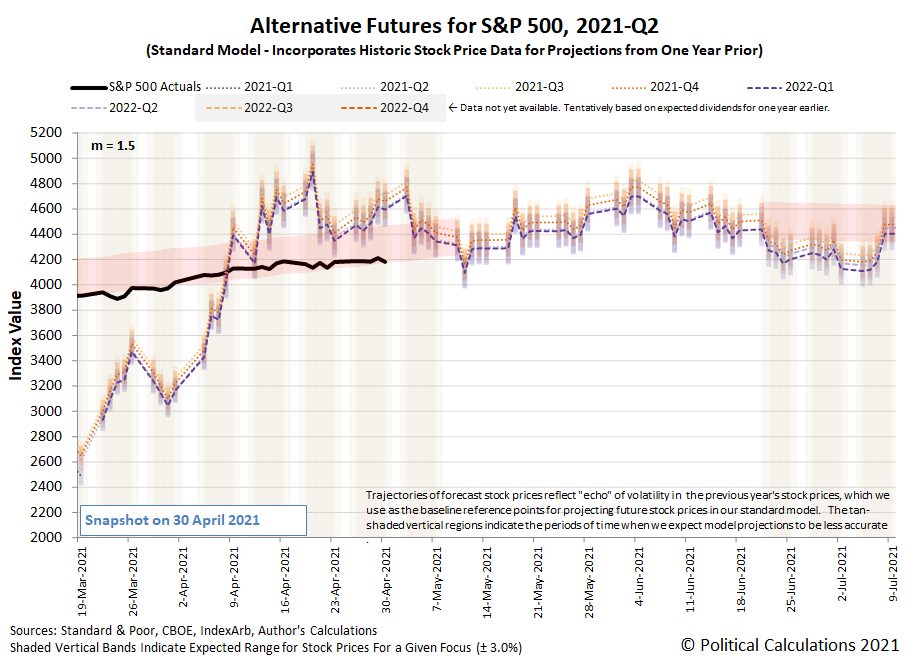 But it is within the component stocks that make up the index that something more remarkable happened in the month of April 2021. Here's ZeroHedge with that story:

... while the 5%-ish gain for the month in S&P is notable, during 18 sessions this month through trading on Thursday, 95% or more of the index’s members traded above their 200-day moving average.

That’s the most days ever observed in a single calendar month and double the previous high of nine days in September 2009.

Being ZeroHedge, they find the cloud in that seemingly silver lining in the form of a note by Miller Tabak analyst Matt Maley:

“Yes, a high number of stocks above their 200 DMA’s is usually positive, BUT it is NOT bullish when the number becomes extreme (like it is now…at 95%). In other words, this data point is much like sentiment. When it is strong, it is positive…but when it becomes extreme, it becomes a contrarian indicator!”

If you've been paying attention to the S&P 500 chaos series, you know we're coming up on when the current trend will end.

But what will be the triggering event that changes the index' trajectory? For that, we pay attention to the market moving headlines in the news. Here's what we flagged as notable in the final week of April 2020.

Want to find out what positives and negatives were in the past week's markets and economics news? Click through to find Barry Ritholtz' succinct summary!