Inventions in Everything often features unusual inventions, but today we're featuring an innovation that has become so commonplace, our modern world would not exist without it.

That invention is defined in U.S. Patent 2,150,821, which was issued to George Dempster on 14 March 1939, which you may recognize immediately by its patent title, the Transporting and Dumping Vehicle. Here's Figure 1 from the patent illustrating the basic invention: 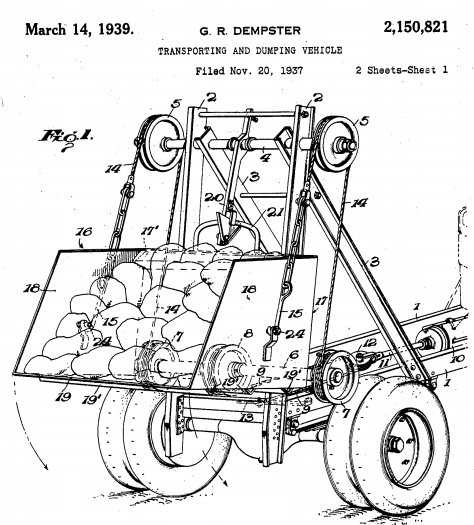 Don't recognize it yet? Perhaps the description of the invention will provide more clues about Dempster's innovation:

This invention relates to transporting and dumping vehicles provided with a container for the load to be transported. In many cases it is desirable to supply a number of containers to the end that while one container is being transported to the point of delivery, others may be filled and ready for transportation when the carrying vehicle returns. With this end in view, it is common in the art to mount on a vehicle, such as a truck, a track, or way provided with suitable means for raising and lowering the container down and releasing it from transporting means at the point where is to be loaded....

One of the objects of the present invention is to prvoide a transporting vehicle of the usual or any suitable type, and supply the same with a container which can be readily loaded at a decreased expense, in time and labor, and which can be readily dumped by the operator of the vehicle, the container being automatically returned to transporting position after the dumping operation.

The invention went on to become so successful that all such containers are known by the name that Dempster trademarked for his invention, which he branded as Dempster's "Dumpster", a portmanteau of his name and the function of his invention.

Meanwhile, George Dempster had quite a legacy:

George Dempster's 1964 obituary described him as one of Knoxville's "most controversial figures" who, in addition to hitting a "financial jack-pot" with his most famous invention, also served as mayor.

The Henley Bridge, sewer disposal system and certain city parks all owe thanks to George Dempster, the obituary said.

George Dempster was nearly 50 years old in 1935 when he came up with the Dempster Dumpster concept while working alongside his brothers for their very own construction company. The company built highways, railroads and water supply dams across the southeast, according to writings from Dempster in the Knox News archives.

The dumpster was designed to be used in rock quarries and in road construction. It wasn't until later on that the Dempster brothers realized it also could be used for trash.

Construction competitors took notice of the receptacles, even asking George Dempster to create similar devices for their jobs, according to the writings.

That's where most people encounter George Dempster's invention today, where versions the scene shown in the following short video of Dempster's concept in action plays out thousands of times a day all around the world:

For inventors, the ultimate success occurs when the branded name of their product becomes the generic name for similar products. For the Dumpster, that happened in 2014 when the trademark for his invention expired. When that happened, what had been the Dumpster simply became the dumpster, the everyday name for a thing that no longer needs to be capitalized according to U.S. copyright law.

If only all inventions were so successful enough for their names to become part of human language.