With the S&P 500 (Index: SPX) having ended its latest prolonged winning streak of 7 days earlier this week, we wondered how frequently such long streaks for the index happen.

We've generated the following barcode chart to visualize each of the S&P 500's long streaks since 3 January 1950: 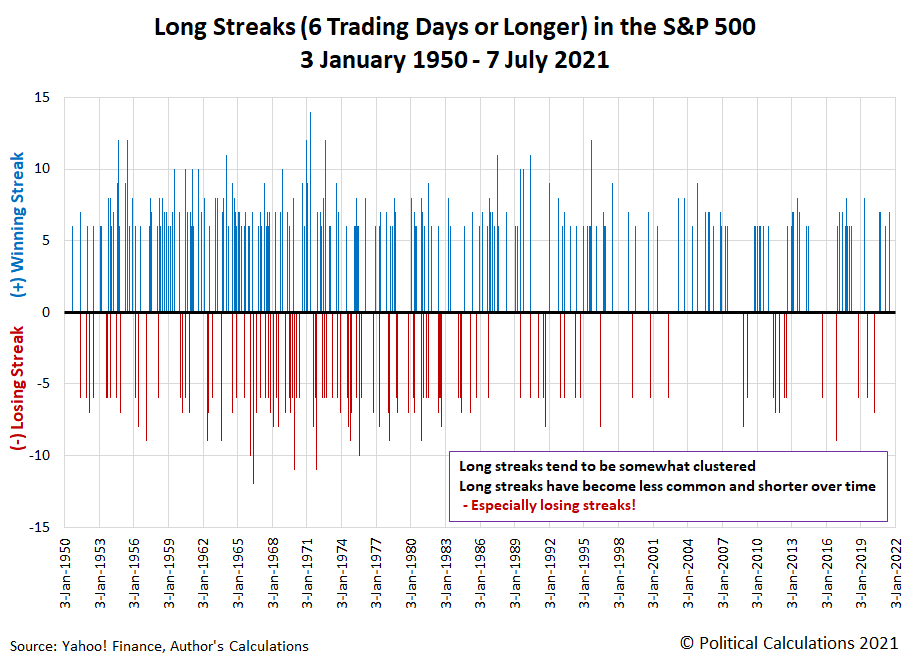 In the chart, we're using the horizontal axis as a timeline, with the vertical bars marking the date each long streak began. The duration of the streak is shown by the length of the bars - these are shown as positive values if they were winning streaks and negative values if they were losing streaks. Periods where streaks occurred more frequently appear as thicker bars, while periods where long streaks were sparse appear as empty or blank space.

Overall, the combination of the relative frequency of the long streaks and the scale of the chart produces a visualization that looks a bit like a UPC barcode.

The visualization does reveal a number of interesting patterns.

Here is some data to quantify these observations.

What changed in the last 20 years to produce that outcome? Is it a statistical anomaly where we'll eventually have a period characterized by clusters of long losing streaks as the trend reverts to the mean? Or has something else changed to stop losing streaks in the S&P 500 from becoming long losing streaks during this period?

We don't know the answers to these questions. As far as we know, we're also the first to report these observations, but if we learn others have noticed and reported it, we'll add that information to the end of this post. For now though, we're very happy to find ourselves back at the cutting edge of discovery!