The Inventions in Everything team has seen a lot of really strange inventions over the years, but today's featured invention is the only one that truly creeps us out. Which is why we're featuring it just ahead of Halloween!

We're referring of course to U.S. Patent 112,550, issued to Robert J. Clay on 14 March 1871. If you read the patent, the description of the invention sounds rather innocent:

This invention relates to a new doll, which is provided with a concealed clock-work and mechanism, whereby its limbs are moved in imitation of those of a creeping baby while the doll itself is being propelled on the floor by concealed rotating wheels which support it. A very amusing toy is thus produced at small cost.

What could possibly be wrong with that? Well, the title of the invention is "Improvement in Creeping Dolls", which should start sending up warning flags on its own, but wait, there's more. Prior to 1880, in order to be issued a patent, inventors were required to submit a physical model of their invention as part of the patent examination process. The model Clay submitted of an "Improved Creeping Baby-Doll" still exists and is in the possession of the cryptkeepers at the Smithsonian Institute.

Think of every horror movie you've ever seen and let us know what your reaction would be if you suddenly saw this thing in action on the screen. Or better still, what if you saw it in your home, coming toward you? 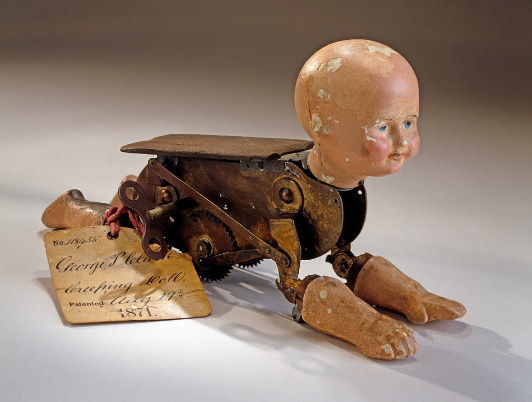 "Pure nightmare fuel" is how the IIE team has come to describe this invention, where the patent's illustrations fail to do justice to what the real-life thing looks like.

We're being a bit facetious in saying that. In truth, the U.S. Patent Office started running out of space to store all the stuff they were getting, so they dropped the requirement except in the case of flying machines and perpetual motion machines, preposterous and impossible inventions that demanded a higher level of examination to be considered for a patent.

The IIE team is aware of other creepy inventions, but subjectively, we rank this one the creepiest. Pleasant dreams, and happy Halloween!