I recently contributed to some back of the envelope analysis over at Josef's Public Journal regarding the performance of Sound Transit's Sounder commuter rail service following the release of the Seattle based Coalition of Effective Transportion Alternatives' "Sound Transit Report Card". In his followup post, "Sounder Math (01)", Josef noted the exceptionally low ridership for Sounder commuter rail between the downtowns of Seattle and Everett, which averages 150 round-trip passengers each workday. By comparison, in 2004 the route between the downtowns of Tacoma and Seattle averaged just under 1,700 round-trip passengers per day.

Why the major difference in ridership between the two cities? I believe the difference is primarily due to the rail routes between them. The rail corridor between Tacoma and Seattle parallels the Interstate 5 (I-5) corridor for much of its route. Meanwhile, the rail route between Everett and Seattle parallels the coast of the Puget Sound. The difference for commuters? Many more businesses are located along the highway than are located along the Sound. Most businesses near the Everett-Seattle rail line are actually located some distance away off Washington State Highway 99, which would require commuters to take secondary public transportation in order to reach their places of work. In addition to the time required to travel via commuter rail, this imposes a substantial additional burden and hassle in getting to their places of work. For commuters between Everett and Seattle, Sounder rail simply doesn't make much sense - certainly not when they may avoid the hassle and drive instead, or take already established bus service if that puts them nearer their work than Sounder commuter rail service.

The exception of course applies for those commuters who work in downtown Seattle, who work much closer to Sounder's stations and do not have to go out of their way just to complete their commute to work. The bottom line is that when it comes to public transportation, how close a commuter's workplace is to the nearest station trumps nearly all other considerations in determining how successful a route will be.

That got me thinking about what it would take to make public transportation successful in being attractive to enough commuters to make it the most preferred choice. The good news is that architects and public officials have individual pieces of the puzzle that only need to be put together. The bad news is that cities, and our ideas about them, would have to be completely reconsidered (not to mention being monstrously expensive!) 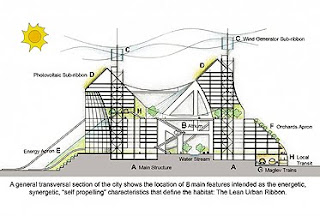 So, to make public transportation viable as the primary means of transport for an entire city, cities themselves need to be designed to closely follow a single transportation corridor. This is where the concept of Solare: A Lean Linear City comes into play. Born in the mind of Paolo Soleri, the leading architect behind some very ambitious urban reconsiderations, including the Arcosanti project near Cordes Junction in central Arizona, SOLARE has been conceived as a "continuous urban ribbon" especially designed for China. Soleri's linear city concept consists of:

Two main parallel structures of thirty or more stories extending for kilometers to hundreds of kilometers.... Each [urban] module can accommodate a population of about 1500 people and the spaces for productive, commercial, institutional, cultural, recreational, and health activities.

The image below shows a view of the concept from both overhead (the upper portion) and from the side (the lower portion):

If you can, imagine the city illustrated above stretching for hundreds and hundreds of miles.

So, What's The Price Tag?

When I look at a concept like this, the first question that forms in my head is: "How much is *that* going to cost?" Unfortunately, I haven't found any cost estimates to indicate what the price tag for a linear city would be, so I turned to the most talented people in the world at thinking really, really, really big: Texans. Here's a description of the Trans-Texas Corridor, which is simply the biggest road of which I've ever heard:

The Trans-Texas Corridor project, as envisioned by Republican Gov. Rick Perry in 2002, would be a 4,000-mile transportation network costing an awesome $175 billion over 50 years, financed mostly if not entirely with private money. The builders would then charge motorists tolls.

But these would not be mere highways. Proving anew that everything’s big in Texas, they would be megahighways — corridors up to a quarter-mile across, consisting of as many as six lanes for cars and four for trucks, plus railroad tracks, oil and gas pipelines, water and other utility lines, even broadband transmission cables.

Now, just multiply that $175,000,000,000 figure by anywhere from 100 to 1000, and you can see what a city to go alongside of it might conservatively cost. Then again, you could pay for it on the installment plan, and it would have no excuses for not having a viable public transportation system from the get go. It's all just a question of how much it's worth to shut up the advocates of ever increasing public transportation services....